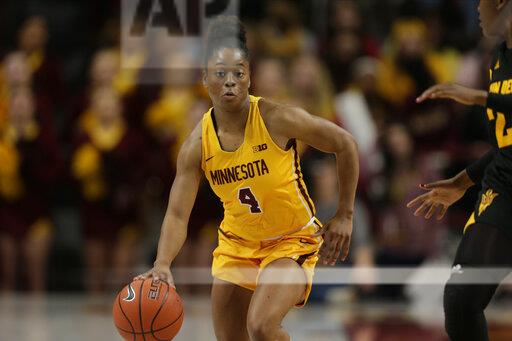 Brunson, a senior, and Powell, a freshman, combined for 35 points, nine assists, nine steals and seven rebounds as the Golden Gophers avenged an earlier 72-58 loss at Nebraska on Jan. 4.

Making her second career start, Powell tied a career high with 19 points, while her 7-of-17 shooting also tied personal bests for field goals made and attempted. She added seven rebounds, four steals and three assists.

Brunson’s 16 points tied a season high and were one off a career best. In addition, she matched career highs with six assists and five steals.

Senior Taiye Bello recorded her 10th double double of the season and the 25th of her career with 13 points and 10 rebounds, including nine points and eight rebounds in the second half alone. It was her fourth straight game with at least 10 boards and her third double-double in the last four games.

Also in double figures was freshman Sara Scalia, who had 11, including a pair of made 3-pointers.

A back-and-forth first half saw the teams tied at 27-27 with just over three minutes to play in the second quarter. Nebraska then went on a 12-0 run to seemingly take momentum, but Gophers senior Masha Adashchyk beat the buzzer with a 3-pointer to make it a 39-30 Huskers lead at halftime.

The Gophers stormed out in the second half scoring the first 10 points. After a basket from Bello, Scalia converted a three-point play to cut the lead to 39-35. Powell made a free throw, Brunson scored and Bello added another layup to complete the run and give Minnesota a 40-39 lead, its first since going up 24-23.

Nebraska countered with the next six points to go back up 45-40, but Minnesota fought back to be down one at 48-47 entering the fourth.

A layup from the Huskers’ Kate Cain gave them a 55-49 lead with 8:24 to play, but it would be all Minnesota the rest of the way as the Gophers embarked on a 13-2 run to take control. Powell had six points during the stretch, while Brunson had four and Bello scored three.

Leigha Brown’s layup ended the Gopher run and made it 62-59 for Minnesota with 1:47 to play. Fittingly, on the next possession Brunson found Powell who knocked down the 3-pointer to push the lead to six. Nebraska, which had 20 fast-break points in the first half but none in the second, did not get closer than four points after Powell’s 3-pointer.

Minnesota now has a quick turnaround as it’s back on the Williams Arena floor Sunday afternoon against Rutgers (16-4, 6-3 B1G).

MEN’S BASKETBALL
CHAMPAIG — No. 19 Illinois did what it took to move back into a first-place tie in the Big Ten.

The Fighting Illini’s seventh straight win, though, was not pretty.

Both teams shot poorly. The Illini shot 33% and the Golden Gophers made 32% of their attempts from the field.

“Well, that was ugly,” Illinois coach Brad Underwood said. “You have to give Minnesota credit, though. They played us tough.”

The Fighting Illini (16-5, 8-2 Big Ten) is tied with No. 14 Michigan State atop the Big Ten standings at the midway mark of the conference’s regular season.

“They were just all-around good,” Gophers coach Richard Pitino said. “They have a great team, good length and talent.”

Minnesota rallied from a seven-point deficit with three minutes to play to pull within one point with 1:43 left on Orturu’s layup. Giorgi Bezhanishvili was fouled with 1:30 left and made both free throws. Feliz later made two free throws to help seal the win.

“It was an all-around team effort,” Underwood said. “But we need to evaluate our way back with our offense.”

The announcement during halftime to evacuate the State Farm Center due to “a fire emergency” appeared to confuse the crowd for a couple of minutes. The alarm was later silenced and it was determined to be a false alarm.

An Illinois staff member said it was “an issue with smoke at one of the concession stands,” that caused it.

It was a game of offensive runs most of the night. Illinois went on a 6-0 run midway through the first half on Trent Frazier’s two 3-pointers to take a 17-11 game. The Illini would not trail again.

The Gophers used a 7-0 run in the second half to pull within four points before Illinois sealed the victory.

“Our shots fell in the second half,” Pitino said. “But something changed on us. They were getting a lot of points at the foul line and we weren’t. The game shifted there.”

If the Illini can pull off that tough road win on Sunday at No. 18, they should move up in the polls. A loss would likely keep them in the Top 25.

Minnesota: The Gophers have lost three of four games and it’s clear Oturu needs more help. They need to have a double-digit scorer, or two, join him in the box score to win.

Illinois: The surprising team needed a win to regain its place atop the conference standings, tied with the Spartans.

Illinois: Play at No. 18 Iowa on Sunday.