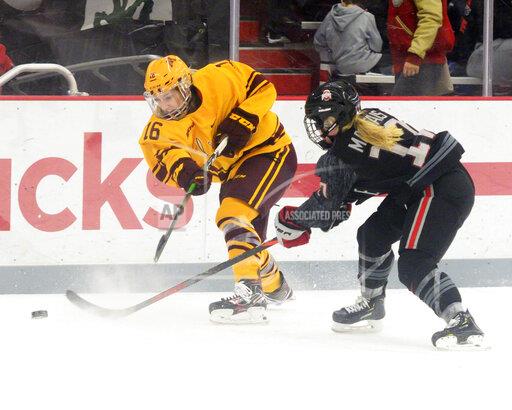 WOMEN’S HOCKEY
MINNEAPOLIS — Amy Potomak led the way with a five-point game, including a natural hat trick, and Sydney Scobee made 17 saves in her seventh shutout of the season to lead the No. 2 University of Minnesota women’s hockey team to a 5-0 win over No. 9 Minnesota Duluth at Ridder Arena on Friday night.

Minnesota (21-4-3, 13-4-2-1 WCHA) received multiple points from Alex Woken (2g-1a), Emily Oden (2a), and Olivia Knowles (2a) along with A. Potomak’s career-high five-point effort (3g-2a). The Gophers commanded the game from the drop of the puck, outshooting the visitors 18-4 over the opening frame and 50-17 for the game. Minnesota’s 50 shots on goal marks the team’s highest output of the season.

The Gophers were two-for-six on the power play while holding Minnesota Duluth (12-9-4, 7-7-3-2 WCHA) scoreless on two opportunities with the skater advantage. UMD netminder Maddie Rooney finished with 45 saves to lead the Bulldogs.

Eleven Minnesota skaters tallied points including two-goal performances from Brannon McManus and Bryce Brodzinski as the Maroon & Gold have won four-straight games and six of the last seven contests.

But five-straight goals from the Maroon & Gold helped the visitors pull away as McManus and Brodzinski each scored goals in the second and third period while Sammy Walker picked up the eventual game winner. The Gophers scored three goals in 4:41 in the second half of the second period with tallies from McManus, Walker and Brodzinski.

Jared Moe picked up the win for the Gophers, improving to 5-4-1 on the year with 18 saves on 18 shots after playing the final 33:28. Jack LaFontaine made 11 saves on 13 shots to start the game. Daniel Lebedeff took the loss with an 18-save performance, falling to 8-11-0 on the year. Jack Berry played the final 23:14, making three saves on five shots.