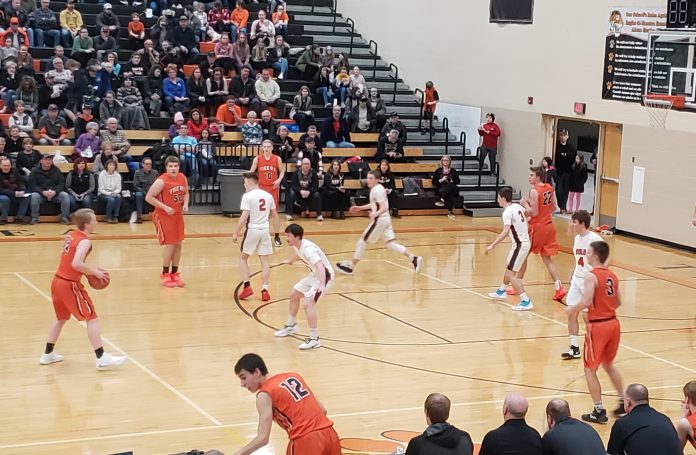 BOLD 75, Morris Area/Chokio-Alberta 72
MORRIS – Jordan Sagedahl’s three-pointer with 3.5 seconds left gave BOLD a 75-72 victory over Morris Area/Chokio-Alberta from the Tiger Center on Friday night.
The Tigers had erased a 15-point second half deficit and evened the score at 72 with 12 seconds left before Sagedahl’s winner from deep. The Tigers heave on the inbound play was picked off by Sagedahl to seal the win.
The Tigers led for much of the first half, holding a 31-27 lead before a 10-0 spurt by the Warriors helped them take 40-36 lead into the break. The Warriors came out on fire in the second half to get the lead to 15 before the Tigers methodically chipped away over the final eight minutes.
Jackson Loge finished with 26 points, 14 rebounds, four assists and five blocks for the Tigers who had their seven-game win streak snapped and fall to 9-6. Durgin Decker added 16 points, Thomas Tiernan scored 13 and Jaden Maanum chipped in 10.
Gavin Vosika finished with a game-high 33 for the Warriors, Drew Sagedahl had 19 points with seven rebounds, Jordan Sagedahl score 13 with seven boards and the top-ranked Warriors improved to 19-0.

Hancock 69, Battle Lake 52
BATTLE LAKE – Hancock outscored Battle Lake by 19 in the second half to earn a 69-52 victory over the Battlers.
The Owls shot 48 percent from the floor and were led by Matt Thompson’s 23 points, 10 rebounds and four steals.
Kody Berget scored 16 points, Preston Rohloff had nine points, six rebounds and four assists, Daniel Milander added nine points, five assists and five steals. The Owls went 16-23 at the foul line and improve to 10-6. Riley Lebo led the Battlers with 25 points as they fall to 3-10.

Red Lake Falls 7, Morris/Benson Area 3
MORRIS – Red Lake Falls scored four straight second period goals to skate past Morris/Benson Area 7-3 on Friday from the Lee Community Center in Morris.
Brady DeHaan’s goal at 6:33 of the first tied the game at one going into the first intermission. Zach Bruns netted a go-ahead goal early in the second before the Eagles rattled off four straight goals before the third period.
Brady Loge scored, DeHaan, Jack Riley, Hunter Blume, Kaleb Breuer, and Tyler Buss each had an assist while Chase Engebretson stopped 29 shots in net. The Storm fall to 15-4 on the season.
Evan Girdler tallied five points for the Eagles with two goals and three assists, Andrew Johnson made 17 saves in net as they improve to 14-6.