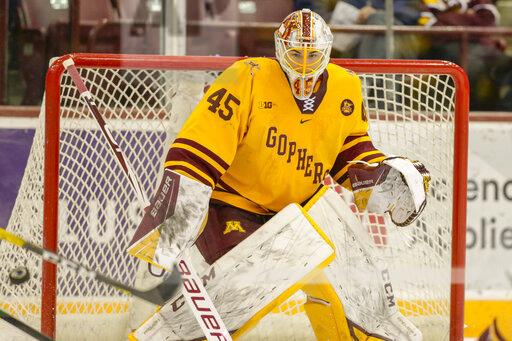 MEN’S HOCKEY
MADISON, Wis. – The Gopher Hockey program locked up its fifth-straight win and its second-straight Big Ten sweep with a 4-2 win at the Kohl Center on Saturday night.

The two teams traded goals in the first period with Bryce Brodzinski tallying his third goal of the weekend for the Gophers. Four of the freshman’s six goals this season have come against Wisconsin (10-15-1, 5-12-1-1). The Badgers answered back later in the period, ending Jared Moe’s shutout streak at 136 minutes and 50 seconds dating back to Jan. 10.

Robbie Stucker notched a power-play tally in the second period before Walker and Scott Reedy added goals in the third period. Down by three, Wisconsin cut into the lead with its second goal of the night, but the Badgers were stifled by a Minnesota defense that tied a season high with 29 blocks (Wisconsin on Nov. 22).

Minnesota was outshot 27-25 on the night with the Gophers going 1-for-4 on the power play and 3-for-3 on the penalty kill.

WOMEN’S HOCKEY
MINNEAPOLIS — The No. 2 Golden Gopher women’s hockey team dropped a 2-0 decision to No. 9 Minnesota Duluth at Ridder Arena on Saturday evening.

Minnesota (21-5-3, 13-5-2-1 WCHA) was shut out for just the second time this season despite holding a 35-24 advantage in shots on goal for the game. The Gophers were scoreless on five power plays while also holding the Bulldogs to 0-for-5 with the skater advantage.

Minnesota Duluth (13-9-4, 8-7-3-2 WCHA) got the eventual game-winner from Gabbie Hughes just 1:28 into the game before Sydney Brodt doubled the visitors’ lead at the 13:11 mark of the middle frame. Maddie Rooney made 35 saves for the Bulldogs as well.