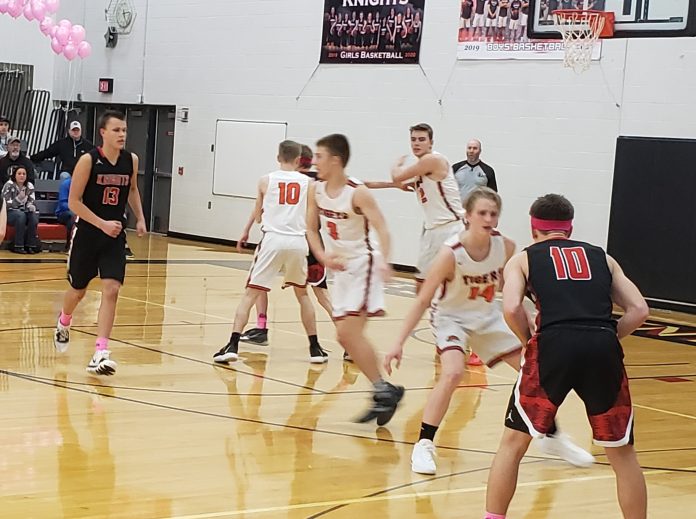 West Central Area 73, Morris Area/Chokio-Alberta 65
BARRETT – West Central Area shot 54 percent from the field and hit 11 threes earning a 73-65 victory over Morris Area/Chokio-Alberta on Saturday.
Grant Beuckens had 21 points, five rebounds and three steals to lead the Knights. Jack Van Kempen had 16 points, seven boards and four blocked shots, Gage Staples had 11 points and Tate Christenson added 10. The Knights are ranked sixth in the state at 15-2.
Jackson Loge had 16 points and eight rebounds for the Tigers. Cade Fehr had 15 points, Bryce Jergenson added 11 as they fall to 9-7.

Morris Area/Chokio-Alberta 60, West Central Area 54
BARRETT – Morris Area/Chokio-Alberta battled with West Central Area all game long and came out with 60-54 victory.
The Knights took their first lead of the game with just 4:07 remaining, but the Tigers, as they had all game long answered with a 5-0 run and held on down the stretch, improving to 11-8 on the season. The Knights fall to 14-6.
Meredith Carrington led the Tigers with 15 points, Malory Anderson added 14 with 10 rebounds, LaRae Kramm chipped in nine points.
Hailey Bennett had a game-high 16 points for the Knights. Lexi Bright scored 12 and Claire Stark added 11 off the bench.

Morris/Benson Area 7, Worthington 1
BENSON – Reece Kuseske, Brady Loge, and Zach Bruns each scored twice and Morris/Benson Area routed Worthington 7-1 on Saturday in Benson.
The Storm led 5-0 midway through the second period before the Trojans got on the board. Time Blume and Jack Riley each had two assists and Chase Engebretson made 31 saves in net as the Storm move to 16-4 on the season. Matt Becker had 30 saves for the Trojans who are 3-18.

Gibson Takes Second At State
Hunter Gibson was a Runner up at 9th grade league state this weekend, pinning his way to the finals.

Hunter is the 1st MAHACA wrestler to make 9th grade state 3 years in a row and the 1st to place at 9th grade State twice. He also has the highest place in MAHACA history with his 2nd place finish this past weekend.