ST. PAUL, Minn. — Matt Dumba scored with 2:39 remaining in overtime to liftthe Minnesota Wild to a 3-2 win against the Chicago Blackhawks on Tuesday night.

Kevin Fiala scored twice for Minnesota and Alex Stalock made 27 saves. Dumba snapped a 33-game goal-scoring drought with his fourth of the season as the Wild won for the second time in three games.

Adam Boqvist and Olli Maatta scored in the third period for Chicago. Corey Crawford made 31 saves for the Blackhawks, who had won six of their previous seven games.

Stalock started in place of Devan Dubynk and didn’t see a shot until 7:22 left in the first period. The Wild outshot the Blackhawks 12-4 in the opening period.

Fiala scored his first goal early in the second, scooping up a loose puck along the wall and spinning into the slot before wristing a quick shot past Crawford, who was screened by Luke Kunin.

He scored his 11th goal of the season later in the period when he took a pass at the Wild’s own blue line and skated straight up the ice before snapping a quick shot between Crawford’s legs.

Fiala, acquired by former general manager Paul Fenton from Nashville last season for Mikael Granlund, had one goal in the previous 17 games. In 65 games with Minnesota, he has 12 goals and 23 assists. Against Chicago, he got his third multi-goal game with the Wild and eighth of his career.

Chicago tied the score in the third as it outshot Minnesota 15-7 in the period. Boqvist scored his third goal of the season and Maatta sent the game to overtime by scoring with 3:10 left in regulation.

Chicago was 0 for 3 on the power-play against a Wild team that ranked 30th in penalty kill in the NHL.

Fiala nearly had his first hat trick in a back-and-forth overtime, that also saw Chicago’s Jonathan Toews ring a shot off the post behind Stalock. Dumba finally won it as the puck flipped up and over Crawford after a scrum in front of the net.

Game notes
Chicago scratched D Nick Seeler a day after claiming him off waivers from Minnesota. Seeler had played in just six games for the Wild this season. He has two goals and nine assists in 99 career NHL games. … Minnesota altered its lineup after losing 6-1 to Boston in its last game. Ryan Donato started in place of Victor Rask on the fourth line and D Brad Hunt was back in the lineup for Greg Pateryn. … The Wild are now 13-7-2 in the last 22 regular-season games against Chicago. … Blackhawks RW Patrick Kane had his 12-game point streak snapped.

Blackhawks: Host Boston on Wednesday night for the second game of the back-to-back. 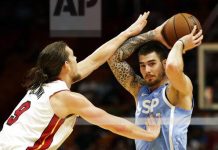 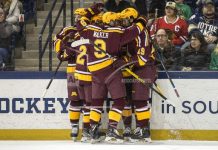