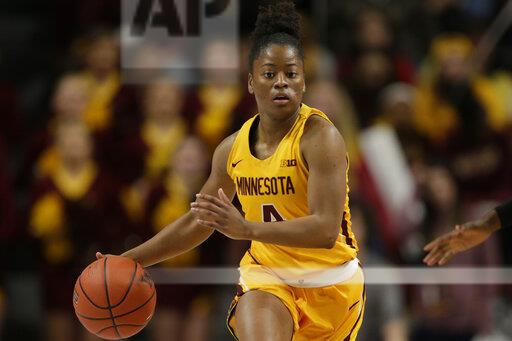 Freshman Jasmine Powell led the Gophers’ attack with a career-high 24 points, besting her previous high of 19 that she had reached twice. She was 7-of-17 from the floor and 7-of-8 from the line while adding five rebounds, five assists and a pair of steals.

Senior Masha Adashchyk joined Powell in establishing a career high as she tallied 15 points, bettering her previous high of 12 set earlier this year against Bryant. Adashchyk had six rebounds, four of which came on the offensive end.

Minnesota took control of the game in the first quarter, scoring 16 of the final 21 points in the frame to lead 18-9 after the first 10 minutes.

The second quarter was all Gophers as they outscored the Badgers, 25-10. Leading 20-11, Minnesota embarked on an 11-0 to go up 31-11. Eight of those 11 points belong to Powell, and she scored 12 points total in the frame, equaling the most scored by a Gopher in one quarter this season.

Minnesota led 43-19 at halftime, its fewest points given up in any half this season.

The teams played evenly early in the third quarter, and Scalia led Minnesota by scoring eight of the team’s first 12 points in the second half. A basket from the Stillwater, Minn., native midway through the frame gave the Gophers their largest lead of the game at 55-30. Wisconsin fought back, though, ending the quarter on a 14-4 run.

The Badgers chipped away even further and got the game back within single digits since early in the second quarter on a bucket from Abby Laszewski, making it a 60-51 game with 5:17 to play.

Minnesota led 64-58 with 2:40 to go, but Adashchyk gave the team breathing room with a 3-pointer as the shot clock wound down, pushing the lead back to double digits. Wisconsin’s head coach was then called for a technical foul, and Powell converted on both free throws to make it a 13-point lead with less than two minutes remaining.

The Gophers were 17-of-21 at the line for the game, including a 9-of-10 performance in the fourth quarter to help put the game away and claim their seventh straight win in Madison.

Minnesota returns to Williams Arena Monday when it hosts Michigan at 6 p.m.