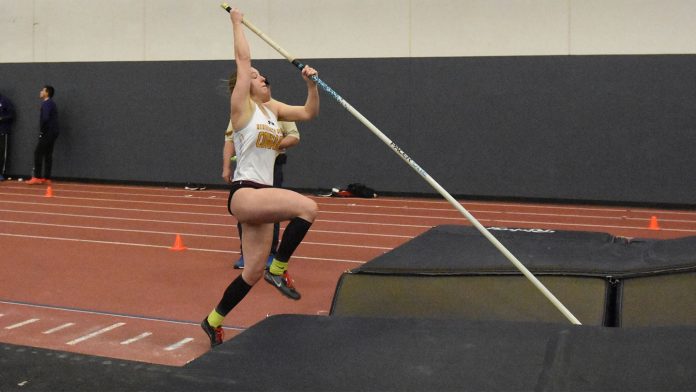 UP NEXT
The Cougars are back in action on Saturday, Feb. 15, at the St. John’s Invite, which takes place in Collegeville, Minnesota.

After the two teams kept things close during the first six minutes of the game, the Cougars used a 14-4 run down the stretch to take a 28-17 lead into the second quarter.
The Cougars then used a strong second quarter to open things up as UMN Morris outscored Northland, 31-13.
With 2:50 to play in the opening half, Jadyn Sondrol hit a 3-pointer to give Cougars a 30-point lead.
After two quarters of play in the books, the Cougars held a 59-30 lead over Northland.
During the third quarter, the Cougars nearly built a 40-point lead as they led 81-42.
Despite being outscored in the fourth, 17-14, UMN Morris coasted to the 95-59 victory.
NOTABLES

Along with her 21 points, Eagle Chasing secured seven rebounds.
Mia Wassink chipped in 16 points on the afternoon – her 20th game this season scoring at least 10 points.
Maddie Fenske and Sondrol scored 10 points each.
Abby Van Kemepen led the Cougars with 10 rebounds.
The Cougars were 6-for-6 on free throw attempts during the second quarter.
During the first quarter, the Cougars made 12 of their 18 shot attempts.
A. Van Kempen played in her 100th career game Saturday.
UP NEXT
The Cougars return home to the Cougar Sports Center to take on Crown on Wednesday, Feb. 12. Game time is set for 7:15 p.m.

After the two teams kept things close in the opening minutes of the game, Haider hit one of his five 3-pointers to put the Cougars up 18-8 with 10:46 left in the first half.
UMN Morris would go on to lead by 11 twice in the first half, but the Lumberjacks brought the deficit down to three points twice down the stretch.
With the first 20 minutes of play in the books, UMN Morris led Northland, 30-27.
Despite Northland tying things up at 37-all with 17:06 to play in regulation, the Cougars never trailed in the second half.
Midway through the second half, Corbyn Alexander connected on a 3-pointer to put the Cougars up 61-51 with 8:56 to go.
With 4:58 remaining in the contest, Northland brought the game within five points but wouldn’t get any closer as UMN Morris secured the 85-76 win.
NOTABLES

Haider’s 28 points are the most points in a game by a Cougar since Carl Douglas had 34 points against North Central (2/10/18).
Jaret Johnson finished the game with 14 points and seven rebounds.
Ian Carlin and Kenneth Riley each tallied 12 points on the afternoon. Carlin was two rebounds shy of a double-double.
The Cougars outscored the Lumberjacks 46-24 in the paint.
UP NEXT
The Cougars return home to the Cougar Sports Center on Wednesday, Feb. 12, to take on Crown. Game time is set for 5:30 p.m.