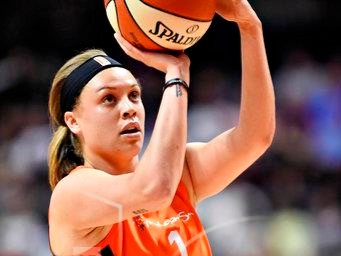 MINNEAPOLIS – The Lynx announced Tuesday night they had acquired Gophers legend Rachel Banham in a sign-and-trade deal with Connecticut. In return, Minnesota sent the Sun a 2021 second-round pick.

Banham was drafted fourth overall by Connecticut in the 2016 WNBA draft — 10 picks ahead of Minnesota’s first selection in that draft.

In four WNBA seasons in Connecticut, the 5-foot-9 guard is averaging four points per game in 11.4 minutes. Banham and Connecticut reached the WNBA Finals last season, before falling to Washington.

“We are excited to welcome Rachel home to Minnesota,” Lynx coach and general manager Cheryl Reeve said in a statement. “Her ability to shoot the ball is something we valued during this process and we look forward to having her in a Lynx uniform this season and beyond.”

During her illustrious collegiate career at the U, Banham set the Big Ten’s all-time scoring record (3,093 points), including an NCAA record-tying 60 points in a game at Northwestern in 2016.

Banham was named the Big Ten Player of the Year in 2016, the same year in which she was named a first-team All-American by the Associated Press and was a John Wooden award finalist.

“I couldn’t be happier to be coming home and be a member of this historic franchise,” Banham said in a statement. “Growing up a Lynx fan, I’ve always admired the way Cheryl and her staff have made the Lynx into a model franchise in the WNBA. I can’t wait to see everyone at Target Center this summer.”