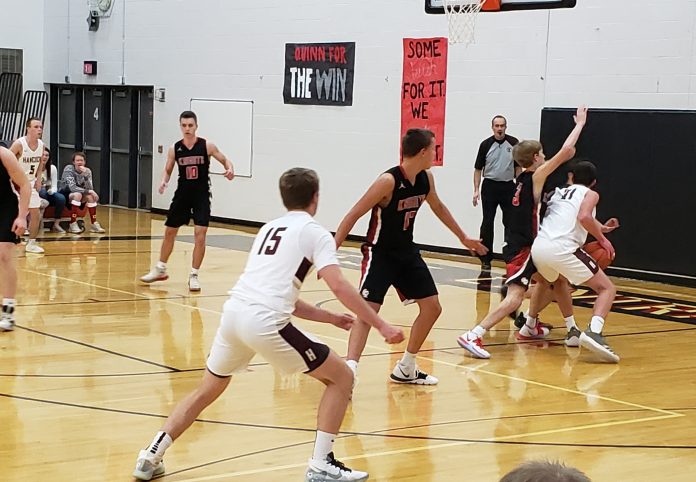 (3) Hancock 61, (2) Parkers Prairie 58 (OT)
MORRIS – Hancock erased and early 14-point deficit and advanced to the sub-section championship after surviving overtime for a 61-58 victory over Parkers Prairie.
Preston Rohloff led the Owls with 18 points, Daniel Milander had 17 with four assists, three steals, and Matt Thompson added in 11 points with nine rebounds, and Brandon Kellenberger pulled down 12 boards.
The Owls had to close the game out with Milander and Thompson who had each fouled out in OT, but were able to do so by hitting their free throws and getting defensive stops.
Aled Koep had 25 points for the Panthers, Josh Helling added 20 as they end the year at 21-7. Hancock is 20-8 and will face West Central Area for the sub-section title on Monday at Concordia-Moorhead, tipoff 7:45.

(1) West Central Area 73, (4) Ashby 55
MORRIS – West Central Area opened the game on a 34-9 run and went on to defeat Ashby 73-55 from the Cougar Sports Center.
The Knights held the Arrows to 33 percent shooting to earn their 16th straight win and will now face Hancock for the sub-section championship.
The Knights once again had great balance in scoring led by Brady Reeve with 17, Tate Christenson 14, Grant Beuckens 14, Gage Staples 11, and Jack Van Kempen 10.
Van Kempen led the dominant rebounding effort with 16 rebounds, Gage Staples added 9, while Bright had a team high 6 assists.
Hunter Nordby led Ashby with 14 points, Jaden Nordby had 11 while Noah Johnson and Jacob Cook each had 10. The Arrows end the year at 19-9, the Knights are 26-2.