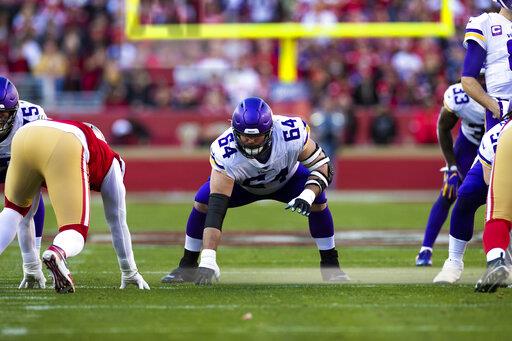 MINNEAPOLIS – In one of the more surprising moves in the start of NFL free agency, the Minnesota Vikings announced Wednesday they’ve terminated the contract of offensive lineman Josh Kline.

The move will cost the Vikings nearly $4.5 million in dead cap money.

The Vikings brought Kline to Minnesota during free agency last year on a three-year, $15.5 million contract that had $7.25 million guaranteed. Kline appeared in 13 games last season, and played in both playoff games. He played in more than 70 percent of the team’s offensive snaps for the season.

Kline missed three games due to injury, and had started 46 straight games before joining the Vikings in free agency. He played the first three games of the season before missing the Week 4 loss at Chicago.

After starting his career for three seasons in New England, Kline played for three years with the Tennessee Titans before coming to Minnesota. Kline, 30, has played in 92 career games with 77 starts.

The Vikings did their big quarterback business earlier in the week when they signed Kirk Cousins to an extension.

Now he has a backup.

According to Ben Goessling of the Minneapolis Star-Tribune, the Vikings are bringing back Sean Mannion on a one-year deal.

Mannion, 27, started a game (the meaningless regular season finale) and appeared in three for the Vikings last year, after coming over from the Rams.

Defensive tackle Linval Joseph lost his job with the Vikings last week, but he’s found a new home before the start of the 2020 league year.

Mike Garafolo of NFL Media reports that Joseph has agreed to a deal with the Chargers. It’s a two-year pact worth $17 million with another $2 million available to Joseph via incentives.

Joseph spent the last six seasons in Minnesota and is coming off a year when he had 44 tackles, three sacks and a forced fumble in 13 starts.

Damion Square is set for free agency after playing 402 snaps on the interior of the Chargers’ defensive line last season and the team cut Brandon Mebane earlier this month. With Sylvester Williams also set for free agency, there should be plenty of opportunity for Joseph to play a big role on defense.