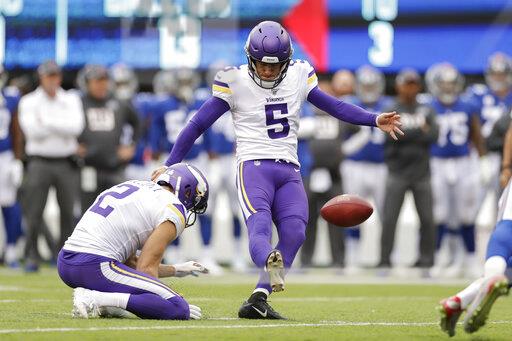 EAGAN, Minn. – Dan Bailey will be staying in Purple.

The Vikings have agreed to terms to re-sign Bailey, the team announced Thursday.

Having originally signed with the Vikings after Week 2 of the 2018 season, Bailey has since played 30 games (excluding postseason) for Minnesota and has made 48 of 57 (84.2 percent) field goal attempts in that span. He has gone 70-for-75 (93.3 percent) on PATs.

Bailey in 2019 ranked fourth in the NFL with a 93.1 field goal percentage, making 27 of 29 attempts, including all three of his attempts from 50-plus yards. He also was perfect on three field goals and three PATs over the course of Minnesota’s pair of playoff games.

He recorded touchbacks on 66 of his 87 kickoffs for the Vikings last season.

Bailey was named NFC Special Teams Player of the Week three times during the 2019 campaign and in November reached the 1,000-career points mark.

“He’s just a quiet demeanor, with confidence,” Zimmer said. “He doesn’t get too high or too low about anything.

“Every time I talk to him, he’s steady as a rock,” Zimmer added.

Minnesota also reached a new deal with punter Britton Colquitt, who signed with the Vikings in 2019 after spending the first nine seasons of his NFL career in Denver and Cleveland. Long snapper Austin Cutting is entering his second pro season after being drafted by Minnesota last April. Colquitt quickly stepped in as holder to connect the rookie’s snaps and veteran’s kicks last season.

Bailey spoke to media members in January and called it a “great” dynamic between the trio.

“The crew and group of guys I ended up with, I couldn’t ask for anything more. They’re both pros on every level and make my job easy,” Bailey said. “It’s been fun, just a really fun year working with those guys. Anytime you’re having success, that makes it fun. We’ve come a long way since training camp, and I’m just happy to be a part of it.”

Reports have the Bengals signing a new slot cornerback in the Vikings’ Mackensie Alexander, a Terence Newman protégé, and here’s a stat that is one of the reasons why:

According to profootballfocus.com, the 5-10, 192-pound Alexander was on the field for 142 runs and didn’t have a missed tackle last season, a number that was a plague for the Bengals last season on all three levels of their defense.

The deal, reportedly a year for $4 million, came two days after they signed Alexander’s backfield mate in Minnesota, Trae Waynes, another corner known for his physicality in the run game.

The 26-year-old Alexander fits the profile the Bengals have been seeking in free agency: an experienced veteran who is heading into his second contract and fifth season as a relatively young player after taking more than 500 snaps last year.