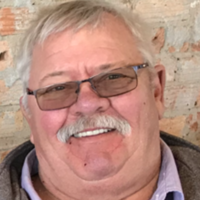 Visitation for Jake Jacobs will be held Thursday, March 19, 2020 from 5:00 p.m. until 7:00 p.m. at the Bainbridge Funeral Home in Wheaton, MN. Visitation will continue Friday morning one hour prior to service time at the church.

Gary Leonard Jacobs was born July 5, 1952, to Gordon and Betty (Walz) Jacobs. He was raised on the family farm near Dumont where he attended Wheaton Public Schools. After high school Jake farmed with his brother and dad until 1981. In his younger days he spent time with family custom harvesting in Oklahoma, Kansas, and South Dakota.

On February 5, 1982 he was united in marriage to Bev (Steffan) Schmidt where he also became a step-dad to Curt and Christy. They welcomed daughters Kayla and Karle.

In 1988 the family moved to Watertown, SD. Jake worked at Benchmark Foam for fifteen years as a truck driver and truck dispatcher. His coworkers there became like family and he maintained these lifelong friendships. Jake and Bev enjoyed cheering on their kids and grandkids in sporting events. They were also active members of Mt. Olive Lutheran church.

In 2003, Jake and Bev moved to Graceville, MN. Jake enjoyed working for Rinke Farms and the Wheaton Dumont Coop Elevator. He especially enjoyed bringing his grandkids with him in the tractor or semi and cruising around town on the four-wheeler. Jake loved helping out local farmers during harvest and planting seasons.

In 2008 Bev passed away and Jake moved back to Dumont shortly after. In his free time and throughout retirement Jake spent time deer hunting, trap shooting, and fishing. He loved watching old westerns, even if he had seen it hundreds of times before, to his girls’ dismay. Jake had a great sense of humor and enjoyed teasing and giving people nicknames. Every morning Jake looked forward to coffee and cards at the Dumont station.