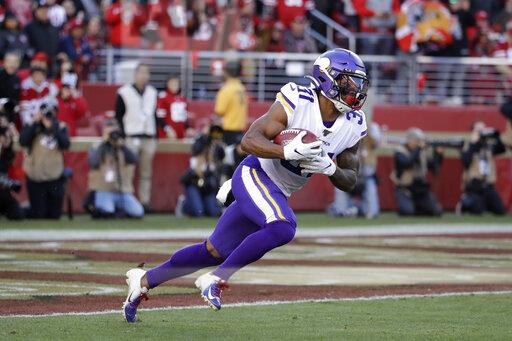 The one-year, $1 million deal will return Dozier to Minnesota for a second season.

He spent his first five seasons with the Jets.

In 2019, Dozier played 16 games with four starts. He saw action on 362 offensive snaps and 73 on special teams for the Vikings.

Vikings Bring Back RB Abdullah
EAGAN – Ameer Abdullah doesn’t get many carries, but has carved out a niche for himself with the Vikings.

So they decided to keep him.

The team announced they had re-signed the free agent running back and return man.

He only got 23 carries and 15 receptions as an offensive player, but he was their primary kick returner, posting a decent 25.0-yard average.

The Vikings have Dalvin Cook and Alexander Mattison, so there’s not much room for him to have a role on offense, but the former Lions second-round pick gives them good depth there.

The 2020 season will mark Jones’ third with Minnesota.

In August 2018, the Vikings acquired Jones from the Giants via trade in exchange for a 2019 seventh-round draft pick. He started the first three games of the 2018 season when Pat Elflein was recovering from an injury suffered during the previous season’s NFC Championship.

Jones re-signed with Minnesota for the 2019 campaign but played just two games for the Vikings. He was placed on Injured Reserve prior to Week 11.

Jones spent his first season in New York on Injured Reserve. From 2016-17, he started 14 of 30 games played for the Giants.

Jones was a standout at the University of Regina and was a second-round selection in the 2013 CFL Draft.