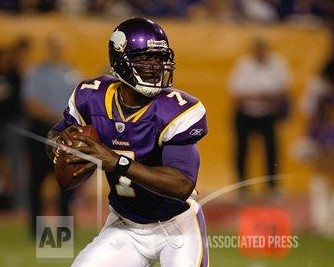 Former NFL quarterback Tarvaris Jackson died in a car crash on Sunday night. He was 36.

Jackson died in a crash in Alabama, NFL Network Insider Ian Rapoport reported, according to a spokesperson for Tennessee State University.

Jackson was a former second-round pick out of Alabama State by the Vikings in 2006. He spent five seasons in Minnesota, starting 20 games. The signal-caller generated his most prolific season as a 14-game starter for the Seattle Seahawks in 2011, throwing for 3,091 yards and 14 TDs.

Jackson then spent one year with the Buffalo Bills but did not play in a regular-season game.

The veteran returned to Seattle as a backup to Russell Wilson from 2013-2015, where he earned a Super Bowl ring.

Jackson transitioned into coaching in 2018, joining Alabama State as a quality control coach and QB coach. He moved to TSU in 2019.