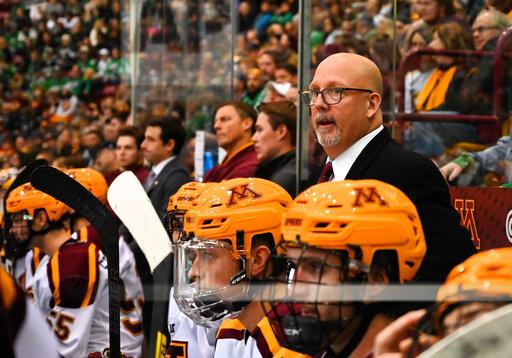 MINNEAPOLIS – Bob Motzko has been named the Big Ten Coach of the Year in his second season with the University of Minnesota, the conference announced on Monday as part of its year-end awards presentation.

Motzko, who was also named as a finalist for this year’s Spencer Penrose Award as a national coach of the year candidate, led the Gophers to the Big Ten tournament semifinals for the second-straight year before the season was canceled due to COVID-19 public health concerns. A native of Austin, Minn., Motzko guided Minnesota to a tie for second in the regular-season conference standings after being predicted to finish fifth in the league. He owns a 310-222-60 career record including a 34-30-11 mark with the University of Minnesota. Earlier this season, Motzko earned his 300th career coaching win to become the third coach in program history to reach the milestone after Don Lucia (736 wins, 457 at Minnesota) and Doug Woog (388 wins, all at Minnesota).

A native of Delano, Minn., Meyers tallied 26 points (10 goals, 16 assists) in 37 games this season – tying for second among all Big Ten freshmen and tying for 11th among all NCAA freshmen in points this season. The forward ranked third among scorers for the Gophers while he was Minnesota’s best man on the draw this season with a .524 winning percentage (301 wins on 608 draws). Meyers was also one of three finalists for the Big Ten Freshman of the Year this season.

A native of Eden Prairie, Minn., LaCombe tallied 13 points (three goals, 10 assists) in his first season with the University of Minnesota. The Anaheim Ducks prospect led all Big Ten freshmen defensemen with 61 blocks and finished second among the group in scoring for the season.

A native of New Prague, Minn., Moe was a unanimous selection for the Big Ten All-Freshman Team after posting a 7-5-1 record as a rookie with a .915 save percentage and a goals against average of 2.46. He led all Big Ten freshmen goaltenders in wins, save percentage, goals against average, saves (366) and shutouts (one). The Winnipeg Jets prospect was a key factor in Minnesota’s second half push, picking up wins in four of his last five appearances for the Maroon & Gold.

Among the All-Big Ten honorable mention selections, Walker and McManus were Minnesota’s top scorers during the 2019-20 season as both forwards recorded their best offensive seasons with the Gophers. A native of Edina, Minn., Walker served as a sophomore captain and paced the Maroon & Gold with 30 points (11 goals, 19 assists) to tie for ninth among conference scorers this season after earning Big Ten Freshman of the Year honors as a rookie. A native of Newport Beach, Calif., McManus recorded a career-high 27 points (nine goals, 18 assists) as a junior for Minnesota.

A native of Edina, Minn., Nanne served as a senior captain and closed out his collegiate career with a career-high 14 points and 10 assists while leading Minnesota with 68 blocked shots.

The All-Big Ten hockey teams and conference awards are selected by league coaches and a media voting panel.