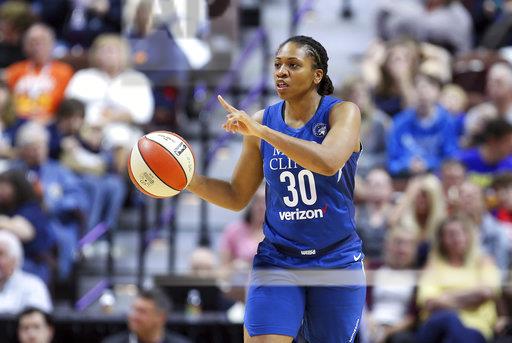 Alexander a 6-4 center from Milton, Ontario, Canada, originally signed with the Lynx to a training camp roster. She played for Chicago in 2019 where she saw action in the Sky’s final three regular season games and two playoff games last season.

Banham joins the Lynx after spending her first four WNBA seasons with Connecticut. In 107 games, the Lakeville North graduate and former Golden Gopher holds career averages of 4.0 points, 1.0 rebounds and 1.0 assists in 11.4 minutes per game. In her best season to date (2018), the 5-9 guard tallied 5.2 points and 1.5 assists in 12.9 minutes per game, hitting 37.0% (30-for-81) from three-point range while seeing action in 33 contests.

Herbert Harrigan, a 6-2 forward, played in 31 games (all starts) for South Carolina this past season, averaging 13.1 ppg and a career-high 5.6 rpg. A 2017 NCAA National Champion, Herbert Harrigan joined Alaina Coates and A’ja Wilson as the only South Carolina players to amass 1,000 points and 200 blocks in their college careers. She sits second in school rankings for total blocks (210).

Dangerfield, a 5-5 guard, averaged 14.9 ppg, 3.7 rpg and 3.9 apg in 30 games during her senior campaign. Of her 30 games, she notched double figures on 24 occasions. The Murfreesboro, Tennessee native was named to the 2020 AAC first-team and All-tournament team.

On April 3, the WNBA announced that training camp and the upcoming 2020 season would be postponed due to the COVID-19 pandemic. For more information, please visit lynxbasketball.com.