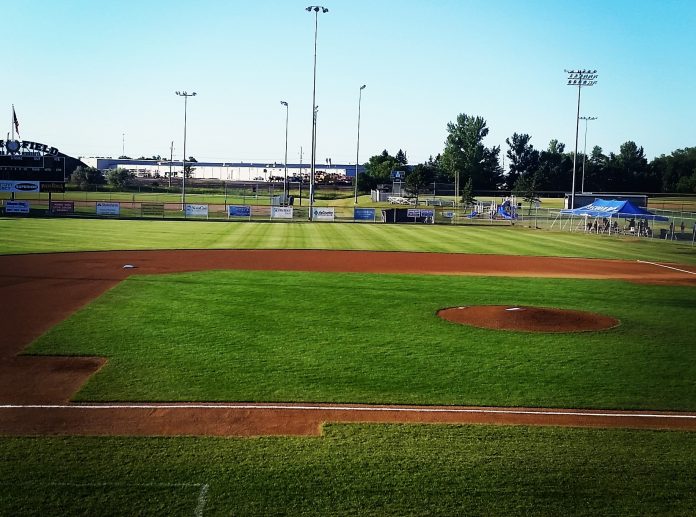 Morris 12, Kimball 2
KIMBALL – Morris erupted for nine runs in the first inning on their way to a dominant 15-3 victory over Kimball on Friday.

Six different Tigers had RBI’s, led by Derek Giese who was 3-4 with three RBI’s and two runs. Sam Kleinwolterink went 3-4 with two RBI’s and a run, Brandon Jergenson and Riley Reimers each had two hits and two RBI’s.

Zach Bruns gave up one earned run on one hit over 4.1 innings for the win, striking out nine. Morris is 1-1 on the season.

Willmar 15s 10, Morris 5
MORRIS – Willmar erupted out of the gates with a nine-run first inning and Morris was unable to recover in a 10-5 loss on Thursday from Chizek Field in Morris.
Ross Marty was 3-4 at the plate with two runs scored, Dylan Rose went 2-2 with a pair of walks, Sam Kleinwolterink and Durgin Decker each had two hits with an RBI, Maddix Erickson drove in another. Dylan Rose, Decker, and Brett Hansen each pitched with Rose suffering the loss.

Willmar 16s 11, Morris 7
GLENWOOD – After trading big inning early, the Willmar 16s were able to pull away from Morris on Saturday at the Starbuck Tournament for a 11-7 victory.
Brandon Jergenson and Tyler Berlinger each went 2-3 with two RBI’s and a run. Sam Kleinwolterink had two hits with an RBI, Flynn McNally knocked in another for the 5039s. Brendan Hardy took the loss, allowing five runs over four innings.

Morris 9, New London-Spicer 7
GLENWOOD – Morris broke open a tie game by plating six runs in the fifth inning, then held on late for a 9-7 victory over New London-Spicer at the Starbuck Tournament on Sunday.
Parker Bartels led Morris at the plate going 2-3 with two RBI’s, Brandon Jergenson was 2-3 with an RBI and two runs scored, Flynn McNally added two hits and scored twice.
Jergenson tossed a complete game for the win, weather a seventh-inning rally by New London-Spicer where they scored five runs. Jergenson allowed seven runs (two earned) on nine hits, walking three and striking out eight.

Minnewaska 13, Morris 3
GLENWOOD – Minnewaska used a seven-run third inning to pull away from Morris on their way to a 13-3 victory from Marthaler Field on Sunday.
Sam Kleinwolterink and Parker Bartels each picked up an RBI for Morris, who went 1-2 at the Starbuck Tournament. Dylan Rose took the loss as the 5039s fall to 1-3 on the season.

Morris 10, Kensington 0
MORRIS – The Morris Brewers won their third straight game to start the season with a 10-0 win over Kensington at Chizek Field on Saturday in Morris.
Curt Schake received the win pitching three hitless innings and two strike outs. Rob Nigg and Brian Giese completed the shutout pitching two innings each.
Brewer hitting was led by the top of the order with Mike Kill going 2-3 with two runs scored and an RBI.
Brian Giese went 3-4 with three runs scored and an RBI. Brandon Lennox and Scott Mattocks each added a pair of hits two RBI’s.
The Brewers next games are scheduled as a double header in Alexandria on August 2nd.