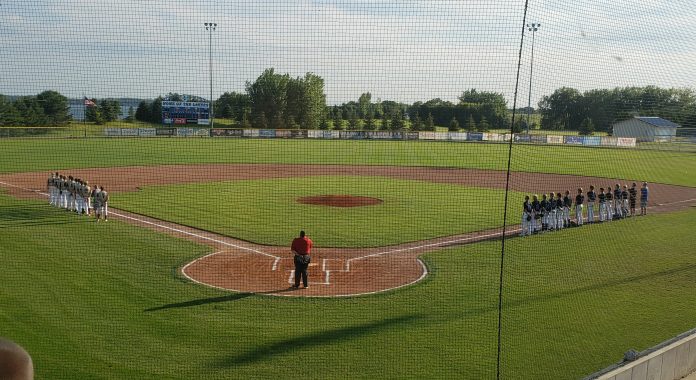 Minnewaska 7, Hancock 1
GLENWOOD – Minnewaska scored seven unanswered runs backed by a strong outing from Mitch Gruber to earn a 7-1 victory over Hancock in 18U baseball from Marthaler Field in Glenwood on Thursday night.

Luke Joos’ RBI single in to score Gideon Joos in the second inning gave Hancock a 1-0 lead, but Minnewaska responded with three in the bottom half, and continued to add on over the next two frames.

Aaron VerSteeg finished 3-4 at the plate with a double, two RBI’s and a run for Minnewaska. Darion Alexander went 2-4 with an RBI and run scored, Jared Freese doubled in a run while Gruber knocked in another.

On the hill Gruber tossed six innings of one-run ball for the win, giving up five hits with three walks and five strikeouts.

Gideon Joos and Kody Berget each doubled for Hancock, with Berget taking the loss on the hill, allowing seven runs (three earned) on seven hits with four strikeouts.

Davin Rose tossed two scoreless innings of relief as Hancock fell to 1-2 on the season. Minnewaska is now 5-0.

Montevideo 10, Morris 9
MORRIS – Morris scored five runs in the bottom of the seventh inning, but their rally came up short in a 10-9 loss to Montevideo in 18U baseball from Chizek Field.

Montevideo never trailed but Morris was right on their heels throughout the game.

Leading 5-4 after four innings, Montevideo used a four-run fifth to create some breathing room, adding one more in the seventh before Morris rallied.

Will Breuer, Riley Reimers and Austin Berlinger each had two hits and combined for four runs for Morris. Cade Fehr and Zach Bruns each had two RBI’s with Bruns hitting a triple, Berlinger and Derek Giese each added an RBI.

Jackson Snell and Colby Buseman each had two RBI’s for Montevideo. Buseman started and gave up four runs while striking out nine over four innings, Sawyer Redinger earned the win in relief. Morris is now 2-5 on the season.

Morris 12, Montevideo 5
MORRIS – Sam Kleinwolterink homered, drove in six runs and scored twice to lead Morris past Montevideo 12-5 in 16U baseball on Thursday night in Morris.

Kleinwolterink’s three-run home run in the first inning set the tone for Morris who jumped out to a 4-0 lead after one, they blew the game open with a five-run fourth.

Kleinwolterink, Ross Marty, Brandon Jergenson and Dylan Rose each had three hits. Marty and Jergenson each had two RBI’s and two runs, Rose had an RBI and scored three runs, Brett Hansen was 2-4 with an RBI.