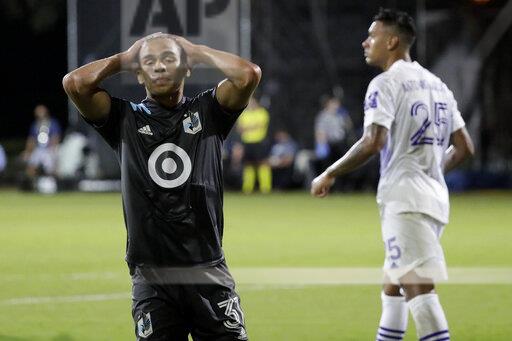 ORLANDO – Two first-half goals six minutes apart by Nani led Orlando City to a 3-1 victory over Minnesota in a semifinal of the MLS is Back Tournament at the ESPN Wide World of Sports complex near Orlando on Thursday.

Orlando will play the Portland Timbers in the final on Tuesday, with the winner earning a spot in the 2021 CONCACAF Champions League.

Nani scored in the 36th and 42 minutes for a 2-0 lead, giving him three goals and three assists in six tournament games.

Mason Toye had the Minnesota goal in the 83rd minute. With the Loons pressing for the equalizer, Benji Michel scored for Orlando in the sixth minute of stoppage time on a breakaway.

Nani, the Portugal and former Manchester United midfielder, opened the scoring off a pinpoint 60-yard ball from defender Robin Jansson to the left flank. Nani’s first touch created separation from defender Hassani Dotson, and he ripped a shot to the far netting past goalkeeper Tyler Miller.

It didn’t take long to expand the lead. This time, Jhegson Mendez found Nani on the left. Dotson gave him too much room, and Nani was able to curl a strike from 22 yards inside the far post.

Meanwhile, Minnesota was unable to mount an attack in the first half. The Loons had four shots, but none were on target in match that had a weather delay of 65 minutes at the start.

Minnesota had an opportunity cut the deficit in the 62nd minute, only to have Jan Gregus’ shot from outside the box miss to the left.

The Loons’ first shot on keeper Pedro Gallese came in the 75th minute, when he stopped an attempt from distance by Raheem Edwards off a free kick.

Toye made it 2-1 with a slotted shot from a pass from Kevin Molino.

The game was billed as the “Adrian Heath Derby” in honor of the Minnesota coach, who led both Orlando (2015) and the Loons (2017) into MLS as expansion teams.