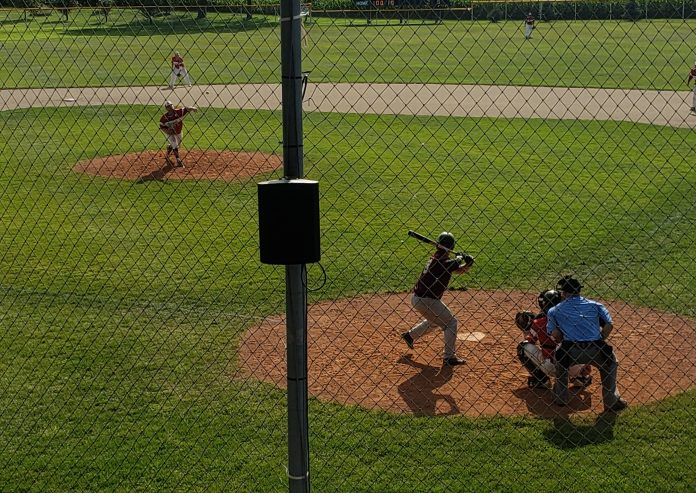 Clinton 6, Chokio 4
ROSEN – The Clinton Cards are heading to state for the first time since 2006 after a pair of exciting victories in Rosen on Saturday for the Region 9C playoffs.

In game one the Cards earned a 6-4 victory over Chokio behind a complete game effort on the hill from Sam Adelman.

The Coyotes struck first when Mitch Daly belted a three-run home run in the first inning. Clinton got one run back in the bottom half, then tied the game on Adelman’s two-run single in the second.

The Cards broke the 3-3 tie in the fifth on an RBI hit from Chance Haugen, and a squeeze bunt from Mike Adelman for a 5-3 lead.

Daly led off the sixth with a ground-rule-double for Chokio, and scored on a fielder’s choice from Tom Holland to make it 5-4. Chris Karsky’s squeeze bunt in the seventh to score Keane Turner put the Cards back up by two at 6-4.

Down to their final strike in the ninth, the Coyotes were able to load the bases with Daly coming to the plate, a triple shy of the cycle. But his chopper back to the pitcher ended the threat and the season for the Coyotes.

Daly went 3-5 with three RBI’s and two runs, Chandler Erickson was 2-4 at the plate.

Clinton 3, Ortonville 2
ROSEN – In game two the Cards took advantage of two costly errors late by Ortonville and got a game-saving catch in center field from Matt Taffe for a 3-2 victory.

The Cards again found themselves down early after Ortonville plated two runs in the first inning. Clinton got one back in the bottom half on Lukas Adelman’s RBI single, then tied it in the fourth on a mammoth home run from Keane Turner.

The game remained tied until the seventh when the Rox committed two errors that led to Ryan Toelle scoring the go-ahead run.

A defensive web gem kept Ortonville from tying the game in the ninth, when Nate Treinen hit a ball into the gap but was robbed of an extra-base hit by Taffe who made a diving catch for the second out, keeping the runner at first. If Taffe misses that ball, the Rox likely would have tied the game and put the go-ahead run in scoring position with just one out.

Toelle tossed a complete game for the Cards to earn the win, giving up two runs on eight hits and striking out six, while working out of numerous jams, stranding six Rox base-runners in scoring position.

Turner was 2-3 at the plate with an RBI, a run and two stolen bases for the Cards who won five straight elimination games to earn their spot at state.

Chris Fellows took the loss for the Rox, giving up three runs (two earned) on nine hits. Treinen was 2-4 and Tyson Powell finished 2-4 with a double, RBI, and a run.

Clinton now faces Morris for the Region 9C championship on Sunday at 11:00. The Eagles need just one win to claim the title while the Cards need to win twice.

Region 4C Playoffs
GLENWOOD – Regal claimed the third and final state tournament spot out of Region 4C with a pair of wins on Saturday before losing to Starbuck in the semifinals.
The Stars will face Bird Island for the region title on Sunday at 11:00 from Marthaler Field. The Stars need to win twice for the title, the Bullfrogs need just one victory.

Morris 4, Urbank 3
URBANK – Jarrod Asmus tossed a complete game for Morris in a 4-3 defeat of Urbank. The Brewers will face Eden Prairie at 11:00 in Fergus Falls on Sunday.