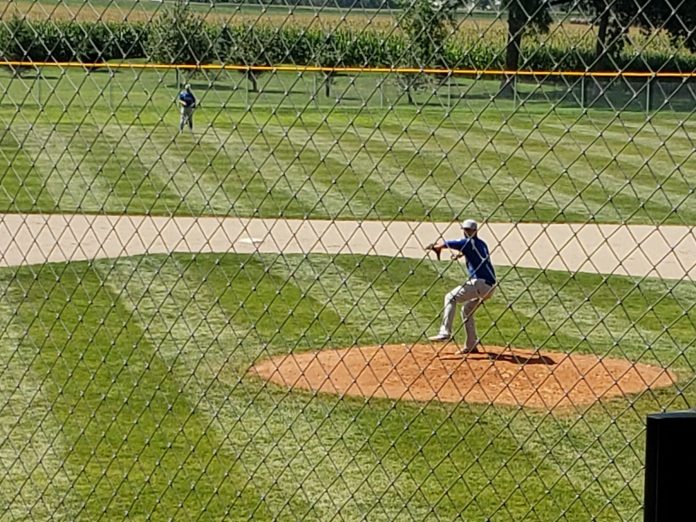 Morris 9, Clinton 2
ROSEN – The Morris Eagles are the Region 9C champions following a 9-2 victory over the Clinton Cards on Sunday in Rosen.

It’s the second straight region title for the Eagles who have earned a first-round bye at the class C state tournament.

Bryce Jergenson was sharp in pitching a complete game for the win, allowing two runs while scattering five hits, with two walks and six strikeouts. The Cards didn’t have a baserunner reach third until the eighth inning off Jergenson, who tossed nine innings on just 99 pitches.

The Eagles were in control throughout the game, with Mac Beyer’s RBI single driving in Zach Bruns for a 1-0 lead after one. A two-out error by the Cards in the third opened the flood gates as Morris plated three more with RBI’s from Jergenson, Jake Torgerson and Brady Jergenson in the third.

Beyer’s second RBI hit of the game in the fifth knocked Cards starter Keane Turner from the game, Tanner Picht welcomed new pitcher Lukas Adelman with an RBI hit for a 7-0 lead.

Picht capped the Eagles scoring with a two-run home run in the eighth, finishing the day 2-4 with three RBI’s, a walk, two runs and two stolen bases. Beyer went 3-5 with two RBI’s and a run. Bruns was 2-5 with a double and two runs scored.

Turner pitched 4.2 innings and took the loss for Clinton, giving up seven runs (three earned) on six hits, walking seven and striking out two. Adelman gave up two runs on three hits with four strikeouts over 3.1 innings of relief.

Adelman went 2-4 with a double and run at the plate, Sam Adelman was 2-4 and Matt Swanson added an RBI hit for the Cards.

Next up for both teams is the Class C State Tournament in Springfield and Milroy. The Cards will face Carver out of Region 7 on Sunday, Aug. 23 at 2:00 in Springfield.

The Eagles will play the winner between Buffalo and Fort Ripley on Sunday, Aug. 30 at 5:00 in Springfield.

Both teams get to draft three pitchers off other region teams to bring with for the state tournament.

The Bullfrogs earn a first-round bye at state and will face the winner between Dilworth and St. Clair on Saturday, Aug. 29 at 8:00.