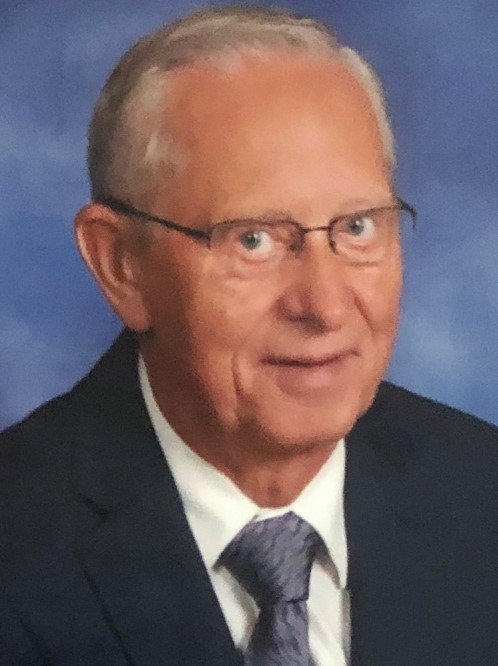 Lauris Johnshoy, 83 of rural Starbuck, Minnesota, passed away peacefully surrounded by his family on Wednesday, August 19, 2020, at the Minnewaska Lutheran Home in Starbuck, MN.

Burial will be in Immanuel Lutheran Cemetery, rural Starbuck, MN.

Lauris Robert Johnshoy, son of Martinus Herbert and Valborg (Reisrud) Johnshoy was born on February 2, 1937, in Starbuck, MN.  He was baptized and confirmed at Immanuel Lutheran Church in Starbuck.  He grew up and spent his lifetime in Blue Mounds Township of Starbuck, graduating from Starbuck High School in 1954.  He was united in marriage to Sharon DeeAnn Krogstad on October 22, 1960 at Barsness Lutheran Church in Glenwood, MN.  Lauris and Sharon lived together on the same family farm for almost 60 years, raising four children; Todd, DeeAnn, Tom and Paul. Lifetime member of Immanuel Lutheran Church.

Lauris was a hardworking farmer; milked cows, raised pigs, worked and harvested crops on both owned and rented land throughout the years. Farming was his true passion and was very proud when the day came to turn over the family farm to sons, Todd and Tom with the help of Paul and Cory. If you were not talking farming with Lauris, there was not much more to discuss at times. Amazingly he found another passion, being employed part-time by the Starbuck Funeral Home for 20 years, working alongside a wonderful group of people. He was very dedicated and always made sure to be a cell phone call away to work a visitation and/or funeral.  He also enjoyed when his wife Sharon joined him in working an event.  He worked for a short time at Star Motor (Ford garage) in Starbuck for Harlen Medalen.

Lauris was very involved in various organizations throughout his life to include holding each council position at Immanuel Lutheran Church (Treasurer 1983 – 1994, Cemetery 1987, Memorial 1983), member on Blue Mounds Township board for 44 years, member on Minnewaska Lutheran Home Board for 12 years, member on Production Credit Association Board, member on Farmers Union Board, sold seed for Wensman Seed Corn

Lauris enjoyed lawn mowing and anything outside, keeping his vehicles clean and having family dogs around.  He enjoyed talking with various people, had a witty sense of humor and a greeting smile.  Lauris and Sharon enjoyed traveling over the years to various places, at times with other couple(s) or by themselves. Recent years were spent going to Ixtapa, Mexico for two to three weeks in January-February. They met many people and created great friendships.  Other travels brought them to Hawaii, Niagara Falls, Montana, Florida to cruise, Arizona, Washington state and Washington D.C. and around Minnesota.

IN LIEU OF FLOWERS, MEMORIALS ARE PREFERED TO IMMANUEL LUTHERAN CEMETERY AND THE MINNEWASKA LUTHERAN HOME.