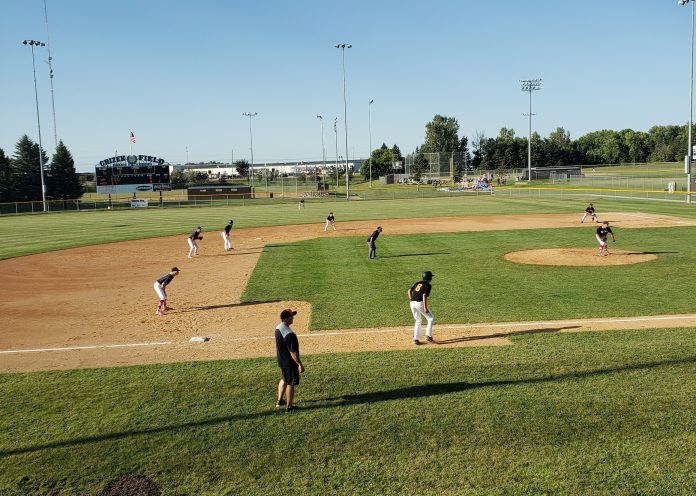 Morris 11, Madison 5
MORRIS – Morris jumped on Madison early and never took their foot off the gas in a 11-5 victory from Chizek Field in the Morris Fall Baseball League opener on Tuesday.

Morris collected 11 hits as a team and led 8-0 before Madison got on the board.

Morris scored in five of their six at-bats, led by Brandon Jergenson, who on top of making some impressive plays in the field at shortstop, went 2-2 with three walks, two RBI’s and  three runs at the plate.

Sam Kleinwolterink and Zach Bruns each finished 2-4 with two RBI’s for Morris, Will Breuer and Durgin Decker each had two hits and a run.

Alexander and VerSteeg each had two hits for Waska, Josh Lindemann led Benson with with two hits.

Hancock had 14 hits as a team, led by Davin Rose who went 2-3 with three RBI’s and two runs scored.

Devan Schroeder was 2-2 with two RBI’s and three runs, Preston Rohloff had two hits and an RBI with two runs, Dane Schroeder doubled and knocked in a pair of runs while scoring twice.

Kody Berget earned the win in relief, tossing 1.1 innings and allowing a run on a hit with three walks and three strikeouts.

Taylor Hanson started, giving up five runs on a hit, five walks and a strikeout over 2.2 innings.