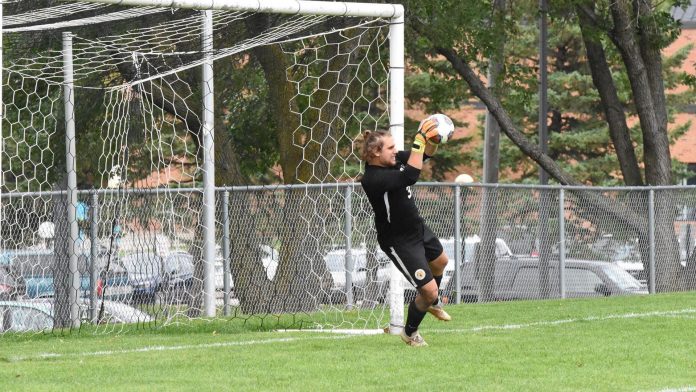 ST. PAUL, Minn.—The Upper Midwest Athletic Conference (UMAC) has announced 2021 spring schedules for the sports of football, men’s and women’ soccer and volleyball after the fall conference season was postponed in those sports due to the COVID-19 pandemic. The conference has also tentatively rescheduled the UMAC Men’s and Women’s Golf Championship for April 29-May 1.

UMAC football member institutions plan to compete under a modified divisional model with a four-game regular season schedule over a six-week period with a tentative final championship crossover weekend. The “North” division will feature College of St. Scholastica, Crown College, Martin Luther College, University of Minnesota Morris and University of Northwestern with all teams participating in a single-round robin schedule with two home and two away games each. The “South” division includes Greenville University, Iowa Wesleyan University and Westminster College with all three teams participating in a double-round robin schedule with one home and one away game against each divisional member.

The regular season football schedule is slated to begin the weekend of March 26-27 and conclude April30-May 1. The conference tentatively plans to host a final weekend at a neutral site, should institutional policies allow, where the top three seeds from each division would compete against each other while the No. 4 and No.5 seeds from the “North” division would compete. The No. 1 North vs. No. 1 South game would determine the conference champion. If the championship weekend games cannot be played, a champion would be named for each division.

In men’s and women’s soccer, conference institutions will compete in an eight-game single-round robin schedule over five weeks with all nine teams qualifying for the postseason tournament. Each team will play in four home and four away contests during the regular season.

The UMAC men’s and women’s soccer regular seasons are planned to begin Saturday, April 3 and conclude Saturday, May 1. The postseason tournament will be held the week of May 3. The top four teams from the regular season will compete in a four-team tournament with high-seed hosting the semifinal rounds and championship game to determine the playoff champion. The remaining five teams will play in a consolation tournament. The No. 8 and No. 9 seeds will play in a quarterfinal game (Monday, May 3) with the winner advancing on. The semifinals for both brackets will take place Monday, May 5. The championship games, along with a third-place game and seventh-place game, will be contested Saturday, May 8.

The UMAC volleyball season will consist of an eight-game single-round robin format over five weeks with each team playing in four home and four away contests. Contests are scheduled to begin Saturday, March 6 and will conclude Saturday, April 3. UMAC volleyball coaches are exploring options for a conference postseason tournament.

At this point in planning efforts for the spring, institutions have the autonomy to schedule non-conference competition at their own discretion during the spring semester. Final schedule dates may vary due to institutional adjustments for weather, facilities and scheduling conflicts with other sports.

The UMAC continues to monitor changing circumstances related to COVID-19. Potential plans for conference competition in golf and cross country will be announced at a later date. Any further decisions for 2020-2021 made by conference governance groups will continue to be driven by available guidance from local and state health officials and the NCAA SSI and are subject to change.