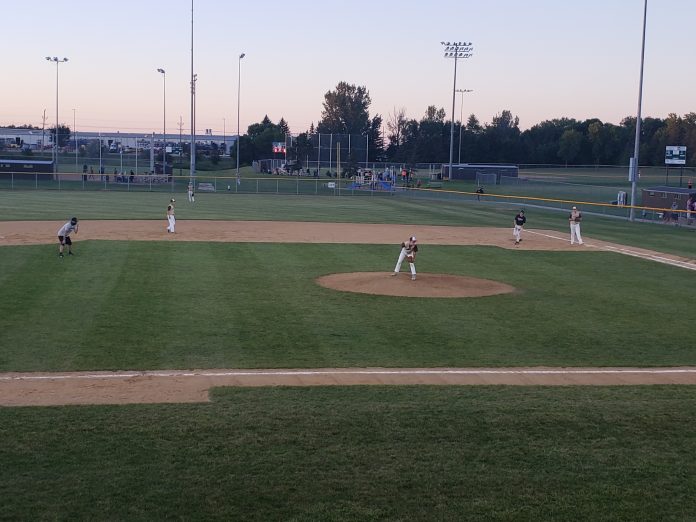 Madison 5, Hancock 3
MORRIS – Despite getting no-hit on Thursday night, Madison found a way to pull out a 5-3 victory over Hancock in Morris Fall Baseball League action from Chizek Field.

Madison’s Carter Amland drew a two-out walk in the first, and came all the way around to score on three passed balls. Kadyn Fernholz made it 2-0 in the third when he scored on a wild-pitch, and Madison plated three more in the fifth on more walks, wild-pitches, and passed balls.

Fernholz had the lone RBI for Madison who improved to 1-1 in league play.

Madison starter Avery Wittnebel struck out 14 over six innings for the win. He allowed three unearned runs on three hits and walked two.

Down 5-0, Hancock got on the board when Kody Berget’s bases-loaded fly ball with two-outs in the sixth was misplayed, allowing three runs to score, making it 5-3.

Devan Schroeder, Isaiah Flaten and Adam Shaw each had hits for Hancock. Schroeder, Rohloff and Rose scored runs as they fall to 1-1.

VerSteeg earned the win, walking five and striking out four. Mitch Gruber and Jacob Blair combined on three scoreless innings of relief, each gave up a hit.

Eli Vandelotte had both hits for Montevideo who drops to 0-2, Minnewaska is 2-0.

Benson 10, Morris 8
MORRIS – Sam Lenarz sacrifice-fly in the bottom of the third broke a 7-7 tie and Benson added two more insurance runs for a 10-8 victory over Morris from Rambow Field.

Morris opened the game by scoring four runs in the top of the first, but Benson responded with a five-run bottom half.

Morris went back in front with a three-run second, but again Benson answered with two in the bottom half to tie the game at seven.

At the plate Bruns went 2-3 with two RBI’s and three runs, Will Breuer knocked in two runs. Sam Kleinwolterink was 2-2 with an RBI, Brandon Jergenson went 2-4 with a run, and Sam Hansen drove in another for Morris who fell to 1-1.

Lenarz gave up six earned runs over five innings for Benson to earn the win. He was 2-3 with two RBI’s and a run.