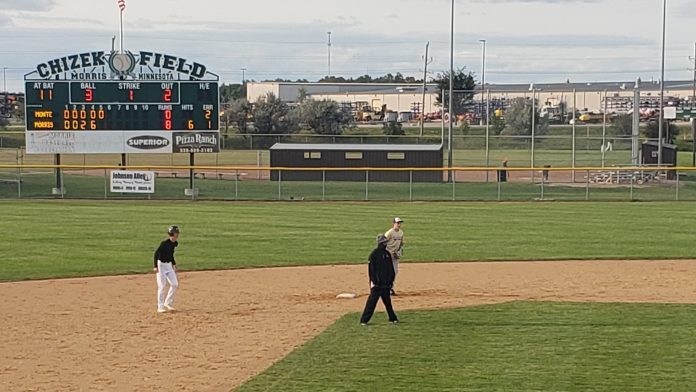 Morris 10, Montevideo 0 (6 Inn)
MORRIS – Brandon Jergenson tossed six innings of one-hit ball and drove in three runs at the plate to lead Morris past Montevideo 10-0 on Tuesday from Chizek Field.

Jergenson was in control from the outset on the hill, not giving up a hit until the sixth inning when Luke Kuno singled with one out.

Morris broke a scoreless tie in the bottom of the third when a two-out throwing error allowed Tristan Raths to reach. Jergenson and Zach Bruns followed with back-to-back hits for a 1-0 lead, Jergenson scored on a wild pitch to make it 2-0.

Morris busted the game open with a six-run fourth. Durgin Decker led off with a double to deep left field and scored on Dylan Rose’s RBI single. Bruns and Will Breuer each drove in a run and Morris led 8-0 after four.

Leading 9-0 in the sixth, Brett Hansen’s RBI single to drive in Breuer ended the ballgame by way of the ten-run-rule.

Jergenson allowed a hit with two walks and five strikeouts for the win, going 2-3 with three RBI’s, two runs and walk at the plate. Decker finished 2-4 with an RBI and run, Raths had an RBI and Morris moved to 2-1 in league play.

Brady Snell took the loss for Montevideo, allowing two unearned runs on two hits and two strikeouts. Three relievers combined to give up eight runs on eight hits as they fall to 0-3.

Mitch Gruber allowed a run over four innings and struck out five for the win. Aaron VerSteeg gave up two runs while striking out seven over three innings of relief. VerSteeg led Minnewaska at the plate with three hits, Darion Alexander collected a pair of hits.

Kody Berget was 2-3 with an RBI for Hancock, Adam Shaw went 2-4 with two runs, Rohloff knocked in a pair of runs as they fall to 1-2. 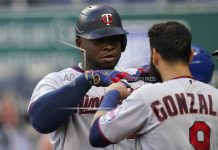 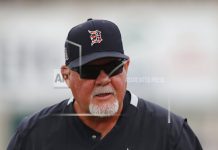 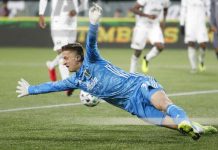