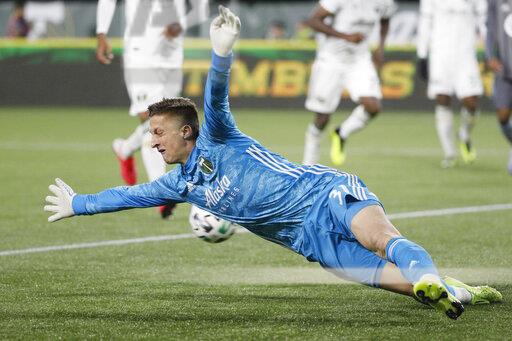 Darwin Quintero and Maynor Figueroa scored second-half goals as the Houston Dynamo rallied for a 2-2 draw with visiting Minnesota United on Saturday night.

Marko Maric had four saves for Houston, which remained undefeated at home against the Loons in MLS play.

Kevin Molino and Robin Lod scored goals for Minnesota United, which had been shut out in its three previous regular-season trips to BBVA Stadium. Dayne St. Clair finished with eight saves, including one on a penalty kick by Quintero.

Minnesota took a 1-0 lead in the 11th minute on Molino’s sixth goal of the season. The Loons took advantage of a Houston turnover at midfield and Jan Gregus then hit Molino on the left wing where he fired a left-footed shot inside the far post.

Seven minutes later St. Clair, making his fourth career start in place of injured No. 1 goaltender Tyler Miller (hip surgery), stopped Quintero on a penalty kick, diving to his left but still managing to kick the dead-center shot away with his right foot for his first career MLS penalty save.

The Loons made it 2-0 in stoppage time just before halftime on Lod’s fourth goal of the season, booting in a rebound of a Molino shot inside the right post.

Houston cut it to 2-1 in the 58th minute on Quintero’s fifth goal of the season. The score came after St. Clair punched away Zarek Valentin’s curling cross straight to Quintero at the edge of the box. Quintero, celebrating his 33rd birthday, then chipped a shot over St. Clair into the empty net.

After Maric kept it at 2-1 with a leaping one-handed deflection of a Molino blast from the top of the box, Figueroa tied it in the 69th minute when he headed in a rebound of a Quintero free kick.

Molino missed a chance to put Minnesota back in front in the 84th minute when his right-footed shot clanged off the right post. Four minutes later, Gregus picked up a red card for violent conduct off the ball but the Dynamo failed to get a good scoring chance down the stretch despite finishing with a man advantage.