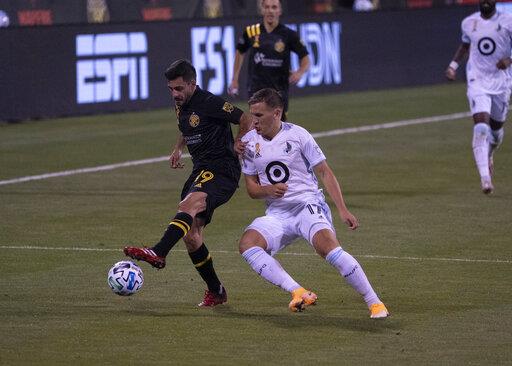 Lucas Zelarayan and Pedro Santos scored in each half to lead Columbus Crew SC to a 2-1 win over Minnesota United Wednesday night at MAPFRE Stadium.

The Crew (9W-1L-3D) maintain their Supporters’ Shield lead and extend an unbeaten streak to six matches, while the Loons (5W-5L-3D) are now winless in their last three.

Receiving a pass from Josh Williams, Santos spun and played a dime to a diving Zelarayan, who headed in his fifth goal of the season in the 31st minute.

Columbus had a great chance to head into the locker room with a two-goal lead after Luis Diaz went down in the box after getting tangled up with Chase Gasper chasing a brilliant ball over the top by Artur.

Zelarayan stepped to the spot, but sent his penalty kick over the crossbar on the final kick of the first half.

The Argentine playmaker probably should have had a hat trick, freeing himself with some nifty footwork before firing a shot off the post in the 65th minute. Dayne St. Clair made a stunning save to deny Diaz on the rebound.

Five minutes later, though, Santos would not be denied, cutting inside and then outside of Romain Metanire before blasting a left-footed shot from an acute angle off St. Clair’s hand and under the crossbar for the insurance tally.

Robin Lod pulled the Loons back a goal two minutes from time — the first conceded at MAPFRE this season for Columbus. And Michael Boxall appeared to head in the stoppage-time equalizer past a rooted Eloy Room, but the goal was called back for offside and the Crew were the first team in MLS to reach 30 points.