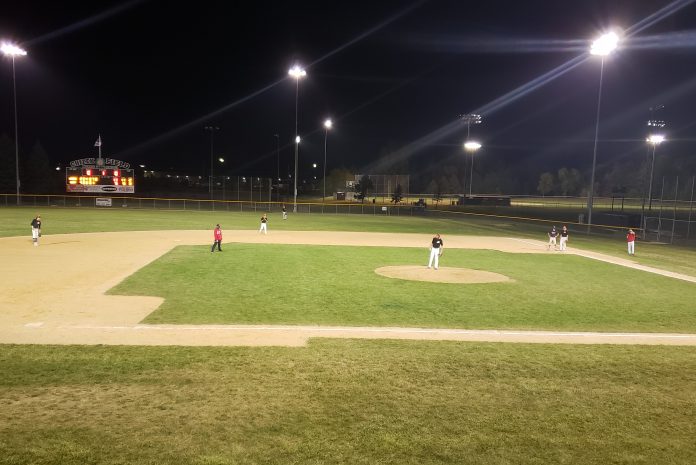 Morris 17, Madison 11
MORRIS – Morris busted the game open with a seven-run fifth inning and held off a late rally by Madison for a 17-11 victory in the Morris Fall Baseball League finale from Chizek Field on Thursday.

Carter Amland’s three-run home run in the first inning helped Madison jump out to a 4-0 lead early, but Morris tied it with four in the third, then pulled ahead to stay in the fifth.

Morris collected 16 hits on the night, led by Brandon Jergenson who was 4-5 with three RBI’s and two runs.

Durgin Decker was 3-5 with an RBI and two runs, Dylan Rose and Tristan Raths each drove in three on two hits, Riley Reimers added a two-run double and Zach Bruns picked up an RBI with three runs.

The Morris bullpen came through in some big spots with Brady Backman, Decker and Jergenson each getting out of bases-loaded jams with Backman earning the win.

Avery Wittnebel took the loss for Madison, tossing five innings and giving up 11 runs (seven earned) on 10 hits and striking out 10.

Amland finished 4-5 with four RBI’s, Wittnebel was 3-4 with two RBI’s and two runs.

Minnewaska 14, Montevideo 1
MORRIS – Minnewaska used a seven-run fourth inning to put the game out of reach in a 14-1 rout of Montevideo from Rambow Field.

After Montevideo opened the scoring in the first, Minnewaska answered with two in the bottom half and never trailed again.

Aaron VerSteeg, Jacob Blair, and Mitch Gruber each had two hits for Minnewaska, with VerSteeg driving in three and scoring twice.

Gruber and Blair each had two RBI’s with a run. Darion Alexander had a hit, RBI, three runs and two walks. Riley Johnson added a hit with two runs and an RBI along with two walks.

Alexander, VerSteeg and Gruber each pitched two innings with Gruber picking up the win.