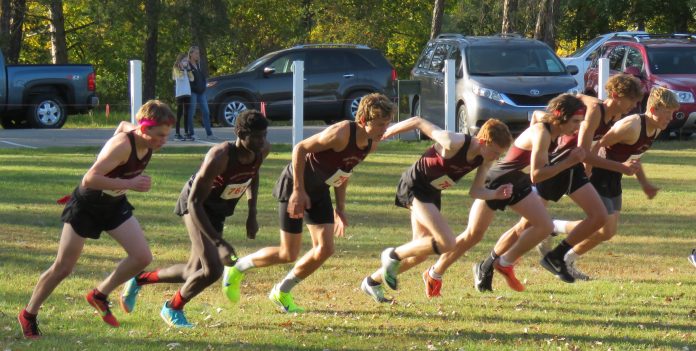 Taylor Bennett finished 5th, Macy Grosz in 6th, Terina Blascyk in 7th and Halle Foslien in 8th. Halle passed two Pequot runners down the stretch so on watchers were scrambling trying to do the math. Alexa Blume was WCA’s next finisher in 12th, followed by Sydney Ulrich in 14th and Brynn Fernholz in 18th.

Kyle Schill led the boys out and raced like he had something to prove, finishing in 16:47 and ahead of teammate Kade Runge who had to pass a racer down the stretch. Alex Salwasser was 4th, Shad Swanson in 5th and Reubens Swanson in 6th. Our top 5 were all under 18 minutes.

WCA ended with 18, followed by Pequot Lakes with 39 and B/W with 79. Peyton Hanson was 12th, Roman Mihailovschi in 15th and Eli Bergman in 17th for his first varsity experience and under 19:30.

Canby Meet
CANBY – We raced against RTR at Canby and it’s tough to go for time when there is such a big spread of runners.

Our lead runners struggled because they got out in front right away and ran a bit too relaxed since they didn’t have people around.

Our middle runners did extremely well and shaved over between 30 secs to a full minute off their previous times. Conner Goodhart ran 1:03 faster, Eli Larson ran 31 secs faster, Cole Sykora and Derek Lupkes have been consistent for us during their races.

On the girls’ side, Emily Franzese had a PR for the season with her time. We had Lilly Stueve back with us after being out with an injury at the beginning of the season, so it was awesome to see her in a Bucs uniform again.