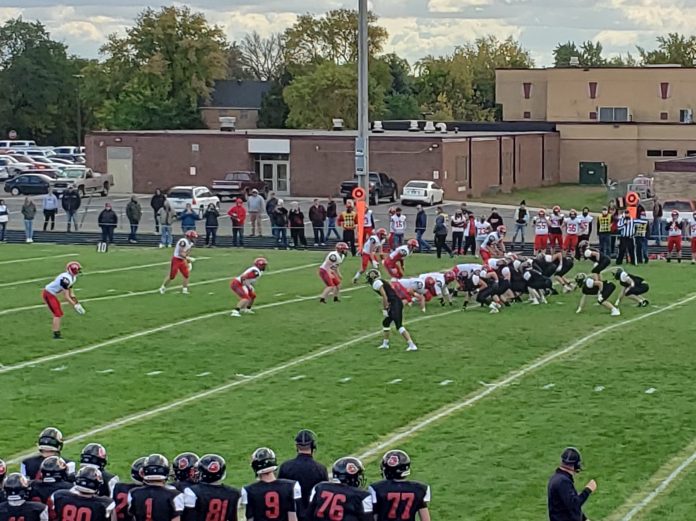 The Knights Anthony Sykora had his own personal comeback during the game. After fumbling on each of the Knights first two possessions and getting flagged for a personal foul, Sykora bounced back to rush for 202 yards on 19 carries, and score three touchdowns.

The Bulldogs defense forced four first half turnovers, and kept the offense was on the field as they built up an 18-0 lead going into the break.

But the second half belonged to the Knights, as they cut the Bulldogs lead to 18-16 by the end of the third quarter on two Sykora touchdown runs, including a highlight reel 32-yarder.

Sykora scored midway through the fourth quarter on an 18-yard scamper that again showed off his athleticism to give the Knights their first lead. Jaden Norby’s two-yard touchdown plunge with 5:44 remaining sealed the win for the Knights.

Evan Paulson was 10-20 passing for 81 yards and two interceptions. Norby had 49 yards on 10 carries. Cole Anderson had an interception defensively for the Knights.

The Bulldogs Tanner Arndt was 13-18 passing for 131 yards with one touchdown and one interception. Brady Van Erp hauled in nine catches for 98 yards and a score.

Canby’s Grace Drietz was the winner on the girls side, Zeke Sather of Lac qui Parle Valley took first for the boys.

In their second home meet of the week on Saturday, Schmidt took first place from the Wheaton Golf Course with a time of 23:11, 10 seconds better than Hillcrest’s Katie Holzner.

In the boys race Arens took second place behind only Tri-State’s Kaleb Foltz.

Following Arens were teammates Derek Lupkes and Connor Goodhardt in third and fourth.