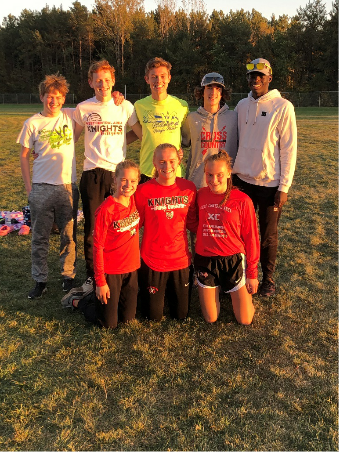 Heart O’ Lakes Conference Meet
PERHAM – They say there are two things in life that are certain, death and taxes. After eighteen consecutive years of witnessing Perham win the conference title in cross country, we were beginning to think there was a third. But the West Central Area Knights put an end to that streak, winning the Heart Of Lakes Conference trophy for our first one and hopefully starting our own streak.

You can ask any coach in the state who has the best cross country program, girls or boys, and it will be a unanimous answer: The Perham Yellowjackets and Coach Jeff Morris. They have always been the standard for comparison for our program and we couldn’t be more proud of how our boys and girls showed up to compete today against them and all the teams in the always tough Heart O Lakes.

Due to some Covid restrictions, only three teams are allowed to compete against each other at one time. The teams were ranked with the best three teams racing at the end of the day.

Our boys were in the top three and began the race looking strong from the start eventually putting five under the 18 minute mark and having five all conference runners. The Knights had all conference runners Kyle Schill, 2nd place, Kade Runge, 3rd place, Alex Salwasser, 5th place, Reubens Swanson, 9th place and Shad Swanson, 13th place. These guys have the ability to stick together in races without losing sight of their teammates. At the end of the day, they place all the teams (9) into the race so you never really know what your place will end up. Our sixth was Peyton Hanson in 22nd and Roman Mihailovski in 25th.

Kyle has been all conference four seasons and Alex and Kade their third. Again, no easy feat in the HOL. The boys team finished with 32 followed by Perham ( 54) and Frazee (100).

The girls race had Lexi Bright winning in commanding fashion, beating the nearest runner by half a minute on her way to being the HOL Conference Champion. Lexi was on a mission to win that race from the start. The team ended up in third to Perham in first (28), Hawley 2nd (63) and the Knights (78), both Hawley and Perham are state ranked teams. Macy Grosz was next for us in 14th followed closely by Terina Blascyk in 15th, making all conference for their first time.

The Foslien sisters were next with Halle in 22nd and Mya in 27th. Sydney Ulrich was our next runner in 33rd and Alexa Blume in 36th. The girls’ races again allowed only three teams at a time so we had to wait to see how the other runners and teams filled in the spaces to see how we would end up. One of the things that has made both our teams competitive is that when the gun goes off, we compete.

Winning is nice but we’re most proud of how the Knights compete. Our next events will be the section meets, with the boys running in Long Prairie on Tuesday and girls racing in New London Spicer on Thursday.