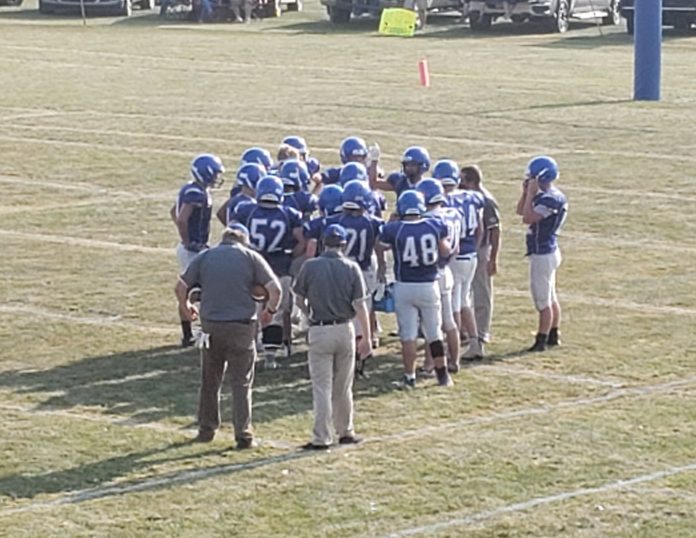 Daunte Fetters paced the Trojans with 130 yards on 18 carries, including a 17-yard touchdown run late in the first half to give Ortonville an 8-0 halftime lead.

The Wolverines finally breakthrough on Isaac Haanen’s 90-yard touchdown run in the third, making it 8-6. The Trojans responded with a pair of fourth quarter touchdown runs from Jacob Rademacher and Carter Powell.

Down 16 with just 3:44 remaining, the Wolverines put together their best drive of the day that was capped with a Chuck Kleindl one-yard QB sneak for a score. The touchdown was setup by a pair of Cole Gilsdorf receptions of 45 and 15 yards. Gilsdorf then hauled in the two-point conversion with a highlight reel one-handed grab.

After a defensive stop, the Wolverines got the ball back with just 19 seconds remaining but couldn’t come up with some late game magic before time ran out.

Haanen finished with 130 yards on 16 carries, Kleindl was 6-12 passing for 75 yards. Defensively Haanen had six tackles, Isaac Ebnet recorded six tackles, two for loss, a sack and had a fumble recovery, but CGB falls to 1-1.

Jacob Rademacher ran for 93 yards for the Trojans who are 1-1.

Section 6A Meet
SPICER – West Central Area’s Lexi Bright is the section 6A girls cross country champion with a time of 19:10, four seconds better than Carline Kuehne of Long Prarie/Grey Eagle on Thursday from Spicer.

Bright led the Knights to a second place team finish with 83 points, Staples-Motley took the title with 37.

Olivia Danielson took eight place for Minnewaska who finished fourth as a team, Border West’s Julia Schmidt was 19th, with the Bucs taking 20th, and Morris Area/Chokio-Alberta took 10th as a team, led by Hailey Werk who finished 28th.

Another balanced attack for the Wolverines with Jessica Moberg and Lora Botker setting the tone with their serving, going a combined 31-32 at the line with 12 aces.