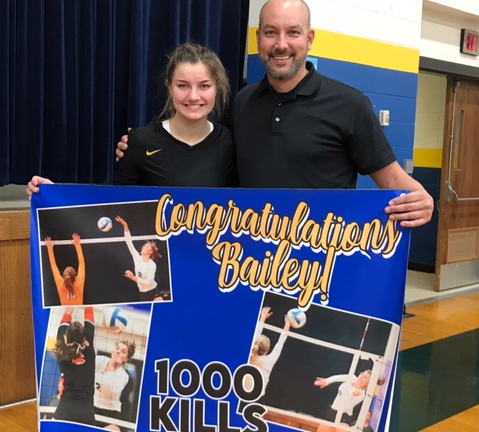 Schaefer is the first player in Chargers program history to reach the milestone, with coach Kelly Olson praising her accomplishments:

“What a wonderful accomplishment for a great volleyball player and better kid, her efforts throughout the years has been tremendous. Weight room at 6:15am each week, summer training, and relentless dedication to the sport make her someone all the younger players can and should learn from if they want to be successful on and off the court.

We are so proud of Bailey, and all the other players who have helped her achieve her goal. Congratulations!”

Schaefer finished the night with 12 kills and 10 digs, Makenna Pattrin had six kills and Korrie Randt tallied 23 assists. The Chargers are 4-0.

Again the Wolverines were anchored by strong serving with Reanna Ward, Lily Murphy and Lora Botker combining to go 32-32 with seven aces.

Jessica Moberg had 14 assists, 14 kills and 13 digs. Ward added nine kills with eight digs, Murphy had five kills, five assists and eight digs for CGB who is 3-0. The Comets are 0-2.

Kills: Morgan Stark had a big day for the Knights with 15 kills, 21 digs and three aces.

Liz Rustan had 13 kills, Halle Foslien added 10. Kaitlyn Hansen racked up 29 digs, Brooke Anderson had 25 and Macy Grosz tallied 27 assists as the Knights improve to 2-3. The Tigers fall to 1-4.