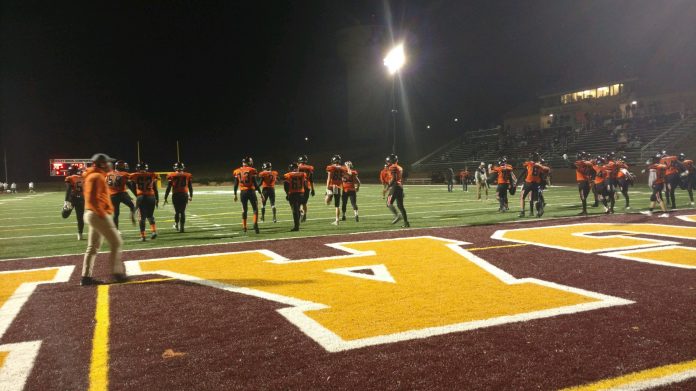 After falling behind 6-0 early, the Tigers scored 34 unanswered points, but had to hold off a Bulldogs fourth quarter rally for the win.

Zach Bruns ran for 177 yards and two touchdowns, including a 77-yarder for the Tigers. Bruns threw a touchdown to Kenny Soderberg for the Tigers final score.

Durgin Decker carried 22 times for 118 yards and two touchdowns as the Tigers ran for 309 yards as a team and improved to 4-0.

Grayson Fuchs was 13-31 for 165 yards passing and a touchdown for Paynesville. Grant Ruchti caught four passes for 105 yards as the Bulldogs fall to 3-1.

Rohloff was 14-25 for 251 yards and hit Brandon Kellenberger for two touchdowns, Luke Joos and Matt Thompson each hauled in touchdown as the Owls move to 4-0 on the season.

Isaac Nienhaus and Davin Rose each ran for a touchdown, Devon Schroeder added a 25-yard pick-six for the Owls.

Joos finished with five catches for 82 yards, Thompson had four for 78 and Kellenberger had five grabs for 75 yards.

The Trojans opened the scoring in the second quarter when Devan Boots hit Daunte Fetters for a 10-yard touchdown.

The Chargers answered when Reiland scored on a one-yard plunge with 30 seconds remaining in the first half.

The Chargers went into the fourth with an 8-6 lead before Reiland connected with Xavier Grussing on a five-yard score. Bitzan’s touchdown run sealed the win.

The Warriors matched the Eagles nearly yard-for-yard but again were done in by turnovers. The Warriors turned the ball over four times while forcing none on defense.

Zach Braaten threw for 105 yards on 8-22 passing with a touchdown and interception. His 22-yard strike to Andrew Walker in the second quarter tied the game at six, the Eagles would answer with a touchdown pass of their own and take a 13-6 lead into halftime.

The Warriors wouldn’t score again until Braaten’s two yard run late in the fourth but it wasn’t enough as the WHN falls to 1-3.

The two teams played close in each set but it was the Lakers each time coming up with the plays in big moments.

For the Tigers Sophia Carlsen had 11 kills, LaRae Kramm tallied 14 assists. The Tigers are 2-4, the Lakers move to 3-3.