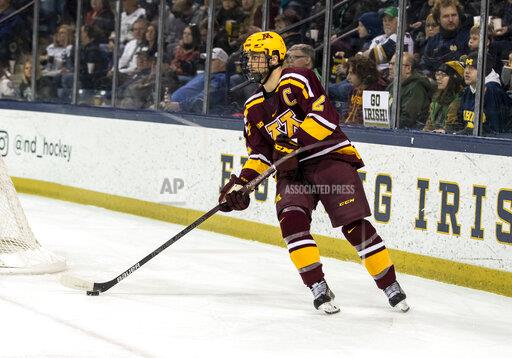 MINNEAPOLIS – The No. 11 Gopher Men’s Hockey program opened the program’s 100th season with a 4-1 win over No. 10/9 Penn State on Thursday night at 3M Arena at Mariucci.

Jonny Sorenson, Scott Reedy, Cullen Munson and Sampo Ranta scored for the Maroon & Gold while Jack LaFontaine made 26 saves on 27 shots to pick up the win in the season opener.

Reedy (one goal, one assists) and Staudacher (two assists) led Minnesota in scoring as Staudacher picked up his first career multi-point game.

The Gophers outshot their opponent 28-27 on the night while winning 37-of-55 faceoffs – highlighted by Ben Meyers winning 11 out of 14 draws.

Minnesota and Penn State close out the first series of the season on Friday, Nov. 20 at 3:00 p.m..