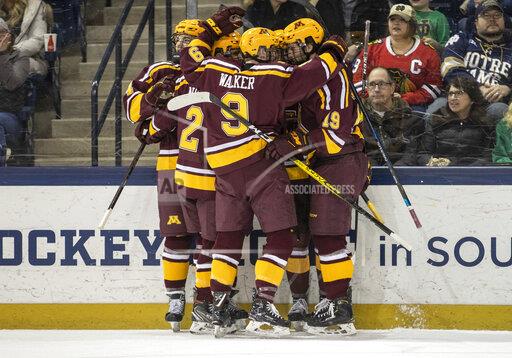 MINNEAPOLIS – A dominant performance in the first 40 minutes carried the newly minted No. 8/7 Gopher men’s hockey program to a 4-1 win over No. 10 Ohio State on Monday night at 3M Arena at Mariucci as Minnesota has now won three-straight games to open its 100th season of play and five-straight contests dating back to last year.

In net, Jack LaFontaine (3-0-0) picked up his fifth-straight win dating back to last year, making 16 saves for the Gophers. The senior has now started 11-straight games for Minnesota and has allowed two goals or fewer in each of his last eight starts. Tommy Nappier (0-1-0) made 23 saves in his first outing of the year.

Minnesota closes out a four-game home stand on Tuesday, Nov. 24 against Ohio State. Puck drop is set for 7:30 p.m.

MINNEAPOLIS — Seniors Lauren Bench and Grace Zumwinkle led the No. 4 University of Minnesota women’s hockey team to a 4-0 win over No. 5 Ohio State in the teams’ season-opener at Ridder Arena on Saturday afternoon.

Bench logged a 36-save shutout in her Gopher debut as the goaltender transferred to Minnesota as a graduate student this season after playing her undergraduate career at Bemidji State.

Zumwinkle scored a pair of goals, including netting the game-winner on the first shot on goal of the game. Madeline Wethington also tallied two points on a pair of assists while Josey Dunne and Taylor Wente found the back of the net for the Maroon & Gold as well.

The Gophers had to settle for a series split after dropping a 2-1 decision to the Buckeyes in game two at Ridder Arena on Sunday afternoon.

Minnesota (1-1-0, 1-1-0 WCHA) once again used an early goal by senior Grace Zumwinkle to take a 1-0 lead, but the Buckeyes answered with a goal by Liz Schepers just 21 seconds later. Tatum Skaggs then gave Ohio State (1-1-0, 1-1-0 WCHA) its first lead of the series, netting the eventual game-winner at the 9:22 mark of the opening period.

Senior goaltender Lauren Bench followed up a 36-save shutout in game one for the Maroon & Gold with a 33-save effort on 35 shots faced on Sunday. Meanwhile, OSU got 25 saves from netminder Andrea Braendli.