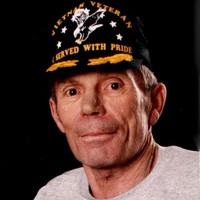 Memorial services for Joe Hamann will be at 3:30 p.m. on Friday, December 4, 2020, at Trinity Lutheran Church, Fairfield Township, with Pastor Donald Klatt officiating.

Burial will be in Fort Snelling National Cemetery.

Rodney Dean Hamann, known to most as “Joe”, was born May 8, 1948, to Roland and Ruth (Mesenbrink) Hamann in Benson, MN. He was baptized at Trinity Lutheran Church, Fairfield, June 6, 1948, and was later confirmed there on May 13, 1962. Joe grew up on the family farm in rural Holloway. He attended country school, Holloway School and graduated from Appleton High School in 1966. After graduation, Joe attended Alexandria Area Technical School where he obtained an Associate’s Degree in Accounting. Joe was a lifelong member of Trinity Lutheran Church, Fairfield, in rural Holloway.

Joe was drafted for the Vietnam Conflict and enlisted in the Army on January 16, 1969. Joe served with Delta Company, 4th Battalion, 9th Infantry Regiment, 25th Infantry Division while in Vietnam and returned home in August of 1970. After returning to the states, Joe joined the MN Army National Guard and commissioned as a Field Artillery Officer in 1971. He later transitioned to the US Army Reserves. Joe held many positions in the Field Artillery, including Recon-Survey Officer, Fire Direction Officer, Fire Support Officer, S2, Operations Officer, and Battery Commander. Joe retired from the US Armed Forces on May 21, 1996. He had 27 years of honorable service to his country and attained the rank of Major.

After returning from Vietnam, Joe went to work for Federated Telephone Cooperative in the accounting department for several years. Following this position, Joe moved into farming with his father and brother, and in later years, driving truck both over-the-road and locally for various farmers. Joe thoroughly enjoyed snowmobiling, hunting and fishing and spent a great deal of his free time doing this in his younger years.

Joe was a proud Veteran and an avid supporter of the military. He proudly displayed his support in all that he did. He actively participated in the Freedom Support Group as a leader during the 2009-2010 deployment of the local National Guard unit, the 175th Forward Support Company, of which his niece, Keely, was a deploying member. He was a member of VFW Post 4955 and AMVETS Post 151.

While Joe never married or had children of his own, he was very close with his nephew and nieces. He adored his great-nieces, Madison and Brooklyn, and was always eager to hear stories and accomplishments of all. He proudly boasted about his extended family to anyone and everyone that would listen.

He was preceded in death by his parents: Roland and Ruth Hamann; and brothers: David Hamann and Roger (“Sam”) Hamann.

Arrangements are with Zniewski Funeral Home-Vaala Chapel in Appleton, MN.