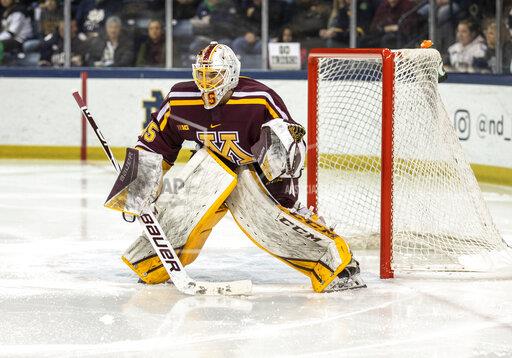 MINNEAPOLIS – Playing in his fourth game in six days to open the season didn’t wear Jack LaFontaine down as the senior earned his first career shutout on Tuesday night in a 2-0 win for the No. 8 Gopher men’s hockey program over No. 10 Ohio State.

LaFontaine backstopped Minnesota to its second-straight Big Ten sweep behind a 22-save performance to close out the four-game home stand. The netminder picked up his sixth-straight win dating back to last year and has now started 12-straight games for the Maroon & Gold. LaFontaine (4-0-0) has allowed two or fewer goals in each of his last nine starts.

Scott Reedy and Nathan Burke posted goals for the Gophers with Reedy finding his third of the season just 1:53 into the battle off assists from Brannon McManus and Ryan Johnson. Burke added to the lead with his first goal of the year at 11:54 of the third with assists from Ben Meyers and Jackson LaCombe.

Minnesota returns to action next month, starting with a two-game Big Ten series at Michigan State on Dec. 3-4. Both games in the series will begin at 7:00 p.m.