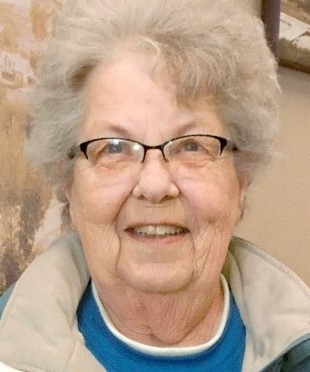 The family will be holding a private ceremony for Peggy on Saturday, January 2, 2021, at the Bainbridge Funeral Home in Herman, MN.

Services will be livestreamed watch the video tribute, vist www.bainbridgefuneralhome.com.

Interment will be later in the spring at Lakeside Cemetery, Herman, MN.

Peggy was born May 2, 1939, in Brush, Colorado, to Melvin and Ethel (Belding) Hakenson. Shortly after her birth, her parents returned to their home state of Minnesota.  Peggy grew up in the Norcross area and attended Norcross Elementary School grades first through eighth. Upon entering high school, she moved up to the big Herman High School and attended ninth and tenth grades there. Due to issues with the school boards, Norcross students attended school in Morris the next two years. Peggy graduated from Morris High School in 1957.

Peggy worked for thirty-four years at the North Central Soil and Conservation Research Lab in Morris. After retiring from there, she was able to do what she loved most…riding horse.  She grew up riding horse with her sister, Patsy, other neighbor kids and with her family. She continued to go on trail rides and was a member of the Grant County Wagon Train for many years. She loved to load up her horse in the trailer and two dogs (Puds and Ace) in the Mini-Home and head for the Black Hills or one of many national parks in North and South Dakota and Minnesota. It was in Little Missouri State Park that she met Wes Stahl and they shared many interests including the two most important, horses and dogs. They were united in marriage on horseback at their home in Kingman, AZ, on August 23, 2003.

Somehow Peggy convinced Wes to move back to Herman, MN, so they could be closer to her children and family members. Peggy enjoyed playing Whist with her friends at the Pullman House and trips to the casino with a variety of girlfriends and sharing coffee downtown at AJ’s C-Store. She and Wes were also members of the Herman United Methodist Church.

Arrangements are with Bainbridge Funeral Home in Herman, MN.