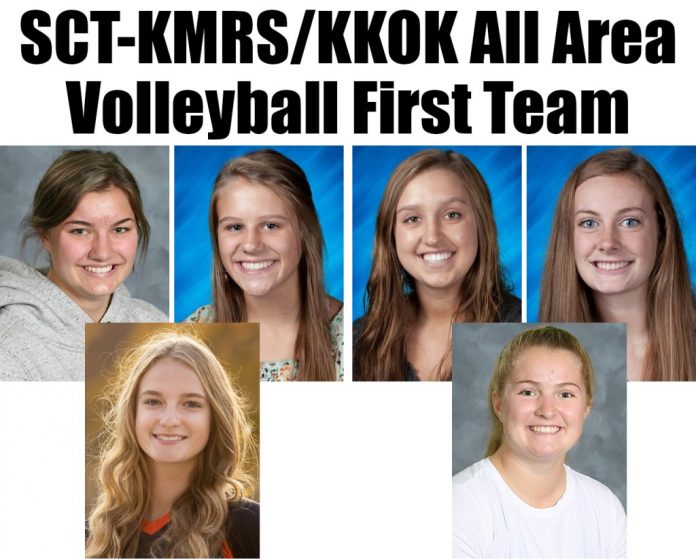 Bailey Schaefer
Brandon-Evansville senior outside hitter and two-time team captain Bailey Schaefer was an all-state honorable mention volleyball player for the Chargers this fall. She was named Little Eight Conference MVP for the second consecutive season after leading the Chargers to a 9-3 record. She finished the year with 207 kills and a 30.4 hitting percentage.

Brandon-Evansville coach Kelly Olson said, “Bailey is a top player in the area and the state. She was the focus of the other team every point of each match. Every night she stepped on the floor, whether in practice or for a match, she dedicated herself to get better and do what was best for the team.”

Jessica Moberg
Clinton-Graceville-Beardsley sophomore Jessica Moberg was named Pheasant Conference MVP and for good reason. She was a do-it-all player, who led the Wolverines to a perfect 9-0 record this fall. She finished the season with 121 kills, 130 set assists and 103 digs.

CGB coach Kristi Moberg said, “Incredible all around player. A force at any position. She is a five-tool player and a stat leader for the team. Young, but a leader on the court and trusted by her teammates. Deserving as a sophomore of all conference MVP and will continue to grow and succeed.”

Lora Botker
CGB senior outside hitter Lora Botker has been a consistent player for the Wolverines throughout her volleyball career. This year was no different. She finished with 135 set assists, 84 kills, and 61 digs as she also garnered all-conference honors from the Pheasant Conference.

CGB coach Kristi Moberg said, “Great player for many years. Is an incredible setter and all-around teammate. Has incredible intuition and can run the show if necessary. Exciting to see what she did as a career player.”

Reanna Ward
CGB senior middle hitter Reanna Ward is the third and final Wolverine to earn a spot on the First Team. She finished the season with 76 kills, 19 aces, 60 digs and 12 blocks.

Morris/Chokio-Alberta coach Leah Schroeder said, “All five of these seniors have been huge leaders in the two years of my coaching at Morris. They bring intensity and focus to practice and energy and pride to the court. They are hard working and dedicated to the Tiger volleyball program.”

Korrie Randt
Brandon-Evansville senior setter Korrie Randt averaged 8.88 assists per set for a total of 364 assists this season. She was named to the Little Eight First Team and finished with 20 ace serves and a 94 percent serve percentage.

Brandon-Evansville coach Kelly Olson said, “Korrie is a player who gave her best everyday in practices and matches. Korrie did not waste an opportunity to get better. A two year captain and a leader in every sense of the word.”

Carlee Hanson
Hancock junior outside hitter Carlee Hanson was the go-to player for the Owls in their 6-3 2020 season. She led the team in kills (82), assists (135) and digs (112) and also garnered Pheasant Conference all-conference honors this season. She had 19 aces with a 91 percent serve percentage, second highest on the team.

Hancock coach Kortney Ejnik-Morrin said, “Carlee shows up everyday and puts in the work. She leads the team on and off the court. There is a quiet intensity about her play that motivates her teammates. You can see her love for the game through her celebrations and interactions with teammates. Statistically, she leads the team in digs, assist, and kills. She’s a player that you want on the court all the way around not only for her play but the positive impact she has on the team as a whole.”

Sophia Carlsen
Morris/Chokio-Alberta senior Sophia Carlsen was a strong force at the net for the 5-7 Tigers this season. The middle hitter ended her career with a team high 101 kills and 15 solo blocks in her senior season. The West Central Conference all-conference player also finished with an astounding 40 ace serves.

Morris/Chokio-Alberta coach Leah Schroeder said, “All five of these seniors have been huge leaders in the two years of my coaching at Morris. They bring intensity and focus to practice and energy and pride to the court. They are hard working and dedicated to the Tiger volleyball program.”

Mikenna Pattrin
Brandon-Evansville’s senior middle hitter Mikenna Pattrin contributed at the net for the Chargers this season with 104 kills and a 47.5 kill percentage. She also had 26 blocks defensively, including 16 solo blocks.

Brandon-Evansville coach Kelly Olson said, “Mikenna is as dominant of a middle blocker as I have seen this year. Good at hitting 3s, 1s and slides. Quick feet and a powerful swing, Mikenna had all the tools to be great.”

Brylie Schultz
Wheaton/Herman-Norcross sophomore Brylie Schultz was a top hitter for the 5-6 Warriors this fall. She had just under 100 kills at 97 and 18 assists. Defensively she contributed with 24 blocks and 29 digs.

Wheaton/Herman-Norcross coach Ann Dreke said, “Brylie works so hard and is constantly trying to improve. She is a positive teammate and strives to make her fellow athletes better. She has a fire and energy that really motivates the team. She has such talent and puts so much effort into her game. I am so proud of her.”

Ellissa Rinke
Wheaton/Herman-Norcross junior Ellissa Rinke was a defensive force for the Warriors this fall, ending the season with team-high 128 digs and team-high 25 blocks at the net. She also had a 94 percent serve percentage with 15 aces and had 78 kills offensively.

Warriors coach Ann Dreke said of Ellissa, “Ellissa is an all-around amazing player. She works so hard and is a positive role model for her teammates. She is very encouraging and helpful to others. Her stats alone show her talent and skill. Ellissa is constantly working to improve and she never gives up. I wish I could have 6 more just like her.”

Morgan Stark
West Central Area senior outside hitter Morgan Stark was the top hitter for the 5-8 Knights this season. The all-Pheasant Conference player and captain had a team-high 94 kills to go with 169 digs and 17 ace serves.

West Central Area coach Missy Foslien said, “Morgan loves volleyball. Any opportunity she has had to play she has taken it. She has been determined to improve her play and fought hard to earn a spot on varsity last year. She plays big for her size, as she was our power hitter on the outside at about 5’6″. She is a scrappy backrow player too. She is a leader on the court, plays with great emotion, and we will miss her next year.”