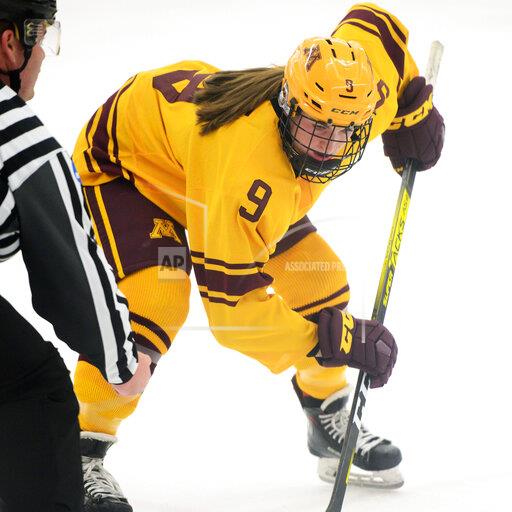 ST. CLOUD, Minn. — Taylor Heise scored a hat trick, including the game-winner, as the No. 2 University of Minnesota women’s hockey team skated to a 4-0 win over St. Cloud State at the Herb Brooks National Hockey Center on Sunday.

Minnesota (8-1-0, 8-1-0 WCHA) got out to one of its fastest starts of the season when Abbey Murphy found Heise, who converted to put the visitors on the board just 33 seconds into the game. Emily Oden picked up the second assist on the play. The linemates then doubled the Gophers’ lead with four minutes remaining in the opening frame when Oden and Murphy again fed Heise on a scoring play.

The teams played a penalty-ridden second period, but both were perfect on the penalty kill as the Gophers held the Huskies scoreless on one power play but were also scoreless on three power plays of their own. Taylor Wente had a goal waived off with just under five minutes to play in the middle frame but capitalized the next shot she got when she solved SCSU goaltender Sanni Ahola off a feed from Catie Skaja and Abigail Boreen to put Minnesota up 3-0 after two periods.

Heise capped off her first collegiate hat trick and sealed the 4-0 win with her third goal of the game with 2:04 remaining. Oden and Murphy each picked up their third assists of the game on the play as well.

Sammy Walker opened things up with a goal 81 seconds into the series finale at LaBahn Arena as the two teams traded goals in the first period. Wisconsin (6-6-0, 6-4-0-0-1-0) briefly took the lead midway through the second period, but the visitors answered back with two more goals to close out the period from Blake McLaughlin and Jonny Sorenson.

Ben Meyers made it 4-2 for Minnesota with the game’s lone power-play goal early in the second period, and after a response from Wisconsin briefly brought it back to a one-goal game, Bryce Brodzinski put the game out of reach in the game’s final minutes.

Walker, McLaughlin and Brodzinski each tallied a goal and an assist in the win while Ryan Johnson added a pair of assists for the Maroon & Gold. Brodzinski now has 10 goals in his Gophers career with five of them coming in the Border Battle.

The Gophers were outshot 24-32 in the series finale.

Minnesota continues the program’s 100th season next weekend with a Big Ten series against Notre Dame at 3M Arena at Mariucci. The action starts on Friday, Jan. 15 at 7:00 p.m.

Jordan Bohannon had 19 points and a career-high 14 assists for the Hawkeyes (11-2, 5-1 Big Ten), who avenged their overtime loss to the Golden Gophers on Christmas. Bohannon did not have a turnover in 36 minutes.

Garza, who came into the game leading the nation in scoring at 27.2 points per game, was 13 of 20 from the field.

Bohannon, who missed most of last season after undergoing a second hip surgery, has scored 74 points in his last four games combined after scoring just 27 in the previous five.

Carr had 30 points and Johnson 26 against the Hawkeyes earlier this season.

Iowa won its fourth consecutive game and stayed within a half-game of the Big Ten lead. Minnesota, which went undefeated in nonconference play, lost for the third time in four games.

Iowa: At home against No. 23 Michigan State on Thursday

Minnesota: At home against No. 10 Michigan on Saturday.

The Golden Gophers had won six in a row in the series and five straight at home, but Penn State used a strong third quarter to score the win.

Sophomore Jasmine Powell led all scorers with 19 points, and she tied fellow sophomore Klarke Sconiers for the team lead in rebounds with six. Also in double figures for Minnesota was senior Laura Bagwell Katalinich, who finished with 12 points and five rebounds.

Junior Kayla Mershon had six points and four rebounds as she made her first start as a Gopher, while freshman Katie Borowicz, who joined the team as an early enrollee on Jan. 2, made her collegiate debut with two points, two assists, a rebound and a steal.

After a tight first quarter in which neither team led by more than three, Penn State opened up a 25-18 lead in the second quarter. Minnesota responded, though, with an 8-0 run that turned into a 13-1 stretch. Ten of the 13 points belonged to Powell as the Gophers turned the seven-point deficit into a 31-26 lead with 3:19 to play in the first half.

The Gophers took a 34-33 lead into halftime, but the Lady Lions opened the third quarter on a 10-2 run in the first two minutes of the second half. Minnesota was able to cut the deficit down to five, twice in the frame, but Penn State outscored the Gophers, 21-10, to take a 54-44 lead into the fourth.

A 3-pointer from Powell cut the lead to 57-51 with 6:10 to play in the game, but Minnesota would get no closer than that.

The Gophers are back in action on Thursday as the host No. 12/12 Maryland. Tipoff is scheduled for 5 p.m.